I’m not quite up to twenty years yet—My First Blog was a LiveJournal, creation date 14 September 1999—although I was making non-blog websites by ’98. Thankfully most of these have been lost to the gods of bitrot; unlike Kottke, I’ve gone through periods where I’ve wiped my old sites and started fresh, mostly because, like him, there’s a lot of shit in my old archives1 I look back now on an cringe over. The person I am at thirty-four is not the person I was at twenty-four… or fifteen, for that matter.

Because I was fifteen when I made my first post on LiveJournal and, of all things, I still remember doing it; I was sitting at my computer in the living room of my ‘rents old house, off school for the day because I’d bargained Mum out of having to attend the athletics carnival if I vacuumed the house. My First Blog Post was explaining this situation, as well as confessing I had not, in fact, vacuumed the house because I was too busy tooling around with LiveJournal (which I was sure would “never take off”).

As mentioned, pretty much all those old websites have been lost to the ravages of time, although I will admit I did get nostalgic and try and have a look for them on archive.org anyway. This was the earliest I could find, circa 2001 (minus all graphics, which from memory featured… Gackt, maybe?): 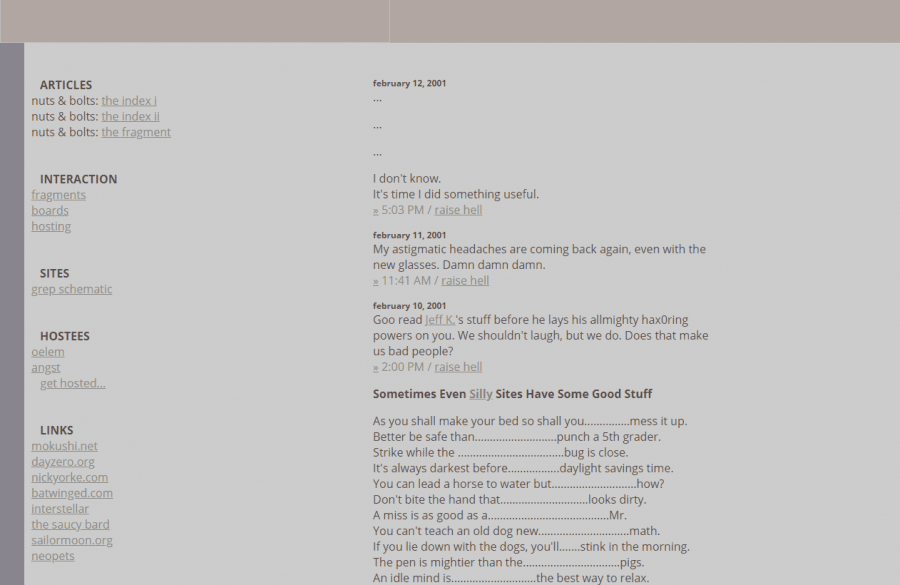 Mostly, though, we were all just so young. Yikes.