Things to see and do.

Uh… I haven’t done something like this for a while but I feel that it Is Time, so… enjoy!

So over the last month I’ve been slowly working my way through every early naughties slendervlog I can find on YouTube, starting with a re-watch of Marble Hornets, then moving through EverymanHYBRID and TribeTwelve, which I’d never seen before.

Of the three, MH very obviously sets the “formula”, basically by realising that Slenderman is actually kind of a crappy villain—he doesn’t actually do anything and you can’t really do anything to him, either—and that the actual narrative tension comes from the human leads making increasingly terrible choices and lying to each other about their histories and motivations. I would say that MH’s SFX are… not as effective in widescreen HD as they were back in YouTube’s 480p days, but the series itself is understated enough that it holds up well all the same.

EverymanHYBRID, meanwhile, is easily the darkest of the three shows, and the most violent; most of the violence in MH is glossed over, but EH has bags of blood and legit depictions of torture, both of the physical and psychological kind, that at times almost border on “how is this still on YouTube?” It’s also the most honest about its protagonists being, at best, antiheroes. Then Actual Series Villain HABIT shows up and spends a lot of time doing dramatic, and apparently frequently improv’d, monologuing at the camera. These are quite good—mad props to the actor, who nails a kind of Joker-via-Beetlejuice angle that’s honestly more memorable than a lot of villains in a lot of professional/commercial horror—but… boy howdy does some scenery get chewed.

EH also extends its mythos out further than MH; by the end of the series Slenderman isn’t even really much of a threat so much as a MacGuffin that drives the series’ actual villain. Also, the Rake shows up, seemingly mostly as an excuse for some gore (and a tie-in to a now-deleted spin-off series).

TribeTwelve I’d never heard of before it showed up in a few crossover EH episodes, but I was impressed enough by its SFX to check it out. It’s easily the most “ambitious” of the three, both in scope and production, and its creator leaning on his IRL family means it has a larger cast of older adults than the other shows. TT’s ambitions are a bit of a mixed bag for it; it seems to rely a lot more on scripted dialogue than the sort of in-character improv its peers lean into, meaning some of its early episodes are, uh. Patchy. It’s also a mostly sole-creator project, with protagonist Noah spending a lot of time talking to the camera/viewers rather than other characters, and this structure frequently works to hinder the show’s pacing; without a Vinnie or a Jay to drive the plot, Noah is quite passive and a big chunk of the series is basically him… doing nothing, trying not to get involved in his own show’s premise because, honestly, that’s an IRL reasonable action to take.

Best use of Gendo Glasses in a horror webserial.

Where TT absolutely kicks it out of the park, however, is in its production. Like MH it uses the whole “ominous response videos from a supernatural force” shtick and these are easily some of the creepiest and most aesthetically cool things I’ve seen. It’s also one of the few shows to try and take on Slederman’s tentacles, and uses a lot more digital effects than its peers. That, plus the generally more consistent audio quality—something that becomes really obvious in the EH crossover episodes—gives the impression the creator has access to higher-end tech than most other genre offerings, which serves both to make the show more watchable but also does, honestly, knock a bit off the cinema verite charm off the series and makes it feel a bit more “fictional” and less found-footagey; something that’s really noticeable in the most recent episodes, that are somehow being produced and uploaded while the protagonist is trapped in a hell-dimension.

TT is also the only series here that’s still ongoing, and heck. I’m looking forward to seeing how it turns out… 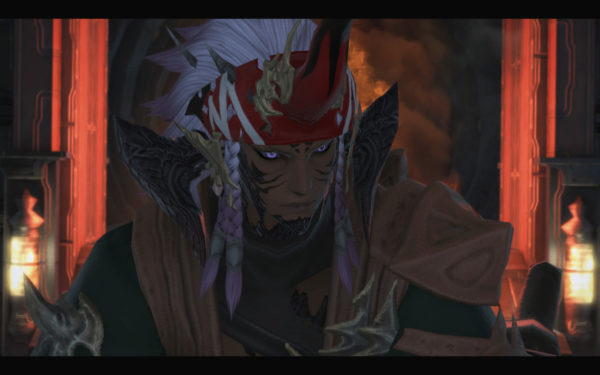 I have almost, almost managed to get through the post-ARR slog in Final Fantasy XIV. This is a notoriously tedious part of the game, mostly involving a lot of “run here, watch a cutscene, run there, watch a cutscene, watch a cutscene, run back, do a dungeon”. Those of you who’ve heard me talk about MMOs for more than five seconds will know that I loathe doing dungeons and the fact FFXIV gates paid-for content behind them—you can’t skip them due to the way narrative progression in the game works—is my least favourite part. Everything else is pretty great, though. Summoner5eva!

Anyway, after a brief table-tip (see below), I’ve finished all-but one Mandatory Dungeon™, so… soon, delicious solo PvE content. Soon I will return to you…

Speaking of table-tipping: while I was doing that I finally downloaded and played Disco Elysium, a.k.a. Sad Cop Simulator. It’s mechanically a cRPG (a la Torment, Tyranny, Kingmaker, Shadownrun, et al.) but actually plays like a point-and-click adventure. It is Very Good; pretty much everyone is recommending this game and they are correct. It looks fantastic, its mechanics are legitimately interesting—it’s also probably one of the only more-or-less positive portrayals of multiple personalities1 in video games—it has Thoughts On Politics and it’s worldbuilding is refreshingly novel. The closest comp title I can think of is Over the Edge, but like… post-apocalyptic. Ish.

My one quibble is I don’t think it quite sticks its landing, but it’s hard to say why without spoiling the game and, like. I don’t want to. So just go play it instead; you will Not Regret, I swear.

This is a borderline reading/playing but… I’m putting it here to pretend I’ve actually read something recently,2 so: because unnamed people kept posting about it on Tumblr, I started playing/reading (pleading?) The Arcana. It took me a while to kind of… “get” it—the intro segment has a bit of a Flirt With All The Things vibe that puts extremely monogamous yours truly off, even in fiction—and I’m still not super-into the whole second-person thing, but… Muriel, right? Just… Muriel.

Anyway, I’ve finished what currently exists for Muriel and Trash Goat Lucio’s routes—like many monsterfuckers I am Deeply Disappointed Sexy Demon Goat!Lucio only shows up in the former, not the latter—and am working on Julian. I started on Asra since he seems the “natural” first route but got wa-aa-aa-ay too creeped out by the whole master-student shtick, and have not revised my opinion now that I know more of the backstory. Asra is creepy. I know he’s not “supposed” to be but… yikes. Hard pass.

(Also: the monetisation in this game is… something else, let me tell you. Like, I play a lot of F2P games with gotcha mechanics (shout-out to Dragalia Lost, Gems of War, and FFBE) but holy yikes none of them are as expensive or as stingy as The Arcana.)

So… yeah. Now you know how I’ve been wasting my time over the last month. Neat!