Having banged this drum extensively before, I decided to check. 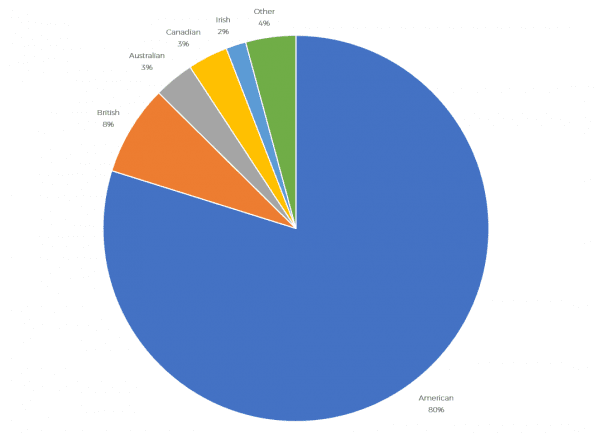 A full 80% of this year’s Hugo’s finalists are American.1 Like, just to remind people; these are allegedly the world science fiction and fantasy awards.

Critically, all of the finalists in the Best Novel, Best Novella, Best Short Story, Best Graphic Story, Best Dramatic Presentation, and Best Semiprozine categories are, near as I can tell, either American, primarily American, incorporated in America, or otherwise America-adjacent (e.g. Canadian). If you extend the category to include finalists from the UK, you can also throw in the Best Series, Best Dramatic Presentation (Short Form), Best Editor (Short Form), Best Editor (Long Form), Best Fanzine, and even Best Art Book, the category specifically included by the Dublin Worldcon. Also including Australia takes out Best Fancast and Best Fan Writer, as well.

Obviously, what you do with this information is up to you. But, personally…

Look. Normally I don’t talk too much about my own reactions to this sort of drama, because I think it’s kind of performative (and also, full disclosure, close to home). But, yes; I had a rule for myself this year that I wouldn’t nominate any American works or individuals for the Hugos,2 and I stuck with that. Needless to say, pretty much nothing I nominated made it to the final lists.

This is a difficult decision because this knocks out some finalists I would otherwise have voted for, in a more representative playing field. And while it’s not those individual finalists’ “fault” that they benefited from a system that is, quite frankly, laughably and obviously unequal… they still did. And they did it at the expense of diverse international voices. There are plenty of awards for primarily US SFF, e.g. the Nebulas. Let them sweep those. But in a world award that’s not, y’know. Representative of the actual world? Nuh-uh. Fix whatever obvious structural issue is happening first. Because it’s not like this problem is new, or that people haven’t been complaining about it for years. And yet it still persists, which means it’s not going to fix itself without radical action.

So… radical action it is.