Okay so I have a confession.

The other day, I started playing TERA. You know, the game that’s mostly infamous for it’s player race of creepy jailbait catgirls who are “really 1,000 years old” and have some kind of killer pants allergy.

(Cut for lots of images, many of which feature videogame characters wearing clothing that would not be considered appropriate in the modern workplace.)

But also mostly for its ridiculous array of chainmail bikinis:

And, look. I’m not proud; I decided to play this game because I wanted to play something that was not just cheesecakey but was unashamedly cheesecakey. Because, don’t get me wrong, I love me some appropriate armor, but… well. Sometimes I just really want to run around and kill giant monsters in a sexy nightie, I guess.

Apparently, I’ve never played the game before because, while I had an account, none of the actual game game looked familiar. I’ve read a lot about TERA, though, mostly from people giving it (not undeserved, let’s be clear) shit over its ridiculous armour designs. Except pretty much everything I’d ever read about the game focused on the Castanics (the horned elf lady, above) and the Elin (the creepy catgirls). For whatever reason, they always tended to elide all the other totally awesome-slash-ridiculous characters you can be in this game.

That guy from Mötley Crüe.

That is legitimately one of the game’s actual random world drop armours. (It counts as light/leather armour, if you’re wondering.)

If Mötley Crüe isn’t your style, maybe you’d like something a little softer.

This picture is showing caster robes. I guess you can tell because he doesn’t have spikes on his arms. Or something.

Even better, though, is that female glam rock elves? Well. They just look glam.

Like they’re all Helen Mirren in RED ready to shoot up bad guys at the Oscars.

Then, of course, you can also be:

Your grandma in the 70s.

That guy from FMA.

No, he’s not wearing a helmet; that’s his face.

Then, of course, my favourite playable character, the Aman:

a.k.a. the bara Pacific Rim kaiju cosplayer with no genitals.

Seriously. Look at that crotch-shot. You can’t even call it a panty-shot because he’s not wearing any.1 This, again, is “light” armour and it’s worn by classes including the Warrior. My Warrior didn’t get any pants at all until level 11, and even then it was just a little pad between his giant bara thighs to, I assume, reduce chafing.

Seriously. Why do these guys not wear pants and have no genitals? The females wear pants.2 Even the males in robes wear pants. Is the “sexy leather-clad bara monster man” market really that big in Korea? Also, how did I manage to get this far without making a single “did you spend a night in Aman” joke?

Anyway. If all of that’s too much, you can also play the game as:

Literally every other videogame protagonist ever.

Although I don’t think I’ve ever actually seen one.

So TERA is hilarious and pretty much whatever cheesecake you’re after you can find it here. The sad part, though?

The sad part is I’m actually really enjoying it.

First of all, because it’s just a visually stunning game, particularly since it’s five years old now. A lot of work has gone into making everything in the game look good, not just the female Castanics. And, yeah. I really do like the armour. I like it because it’s all different; a single piece of armour has a different appearance depending on the gender and race of whomever puts it on, which ends up meaning that every race has a very distinctive style and personality. But the environments are also visually very nice and the game has that special style of monster design you only find in Asian RPGs and that I happen to really like. 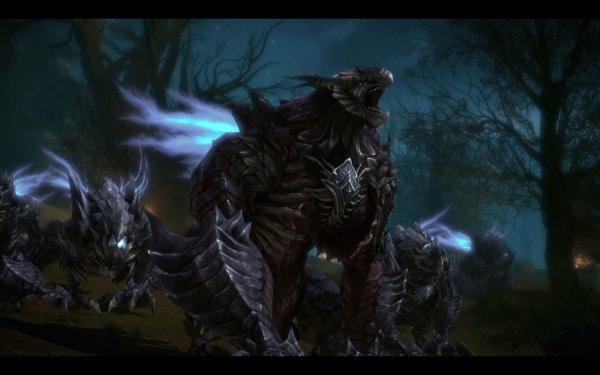 You know. This one.

The actual gameplay is… okay. It has massive looting and inventory management issues (to make you use your Really Real World cashmoney to buy extra bag slots and “autoloot” pets, I guess), and the combat itself is on that weird cusp between the “ten million buttons” WoW-style MMO, and more streamlined modern action MMOs like Guild Wars 2 and Wildstar with their more limited loadouts. TERA uses an FPS-like mouselook targeting system coupled with stay-out-of-the-fire style boss tells, which means you have to move around in combat. Moving and pressing 24 skill buttons is kind of a no-go, and TERA handles it by having chain attacks. Basically, you can set your skills up to say “after casting This Spell, cast That Spell”, where the triggered spells all use the spacebar to activate. It’s a bit of clunky system, especially since the game animation locks you in most classes, and not every class can move while using abilities.

I gather this system is in place so that people can imply TERA takes “skill” to play but, honestly, not really; if you have played, for example, a videogame, you have enough “skill” to play TERA. I do get the impression the game has been nerfed severely in the last few years, but so far the most difficult thing I’ve encountered has (ironically) been the tutorial mission. I found once I’d gotten out of that, the difficulty plummeted. 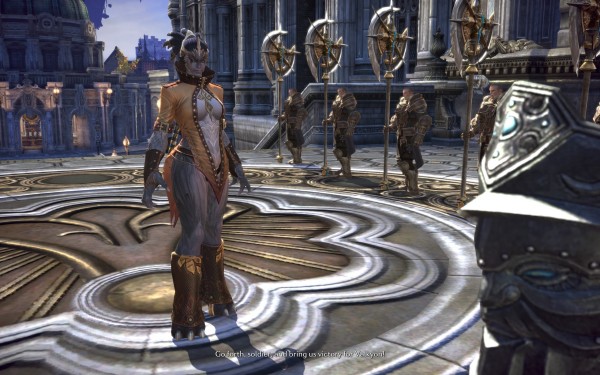 A ceremony? For me? Oh you should have…

This isn’t a complaint, mind you; I like games that aren’t particularly challenging, mostly because I’m an adult with a day job and I play videogames to relax, not to scream at the monitor in frustration. YMMV, and I assume there’s raids and PvP and whatever if so.

For my main in TERA I’ve been playing a Mystic, which is a pet-based healing class. Self-heal plus range plus a pet to draw aggro plus some decent AoE is pretty much the I win button in any game, so she tears up the map so easily she’s level 35 and has never actually died or, in fact, even gotten down to less than half health. Which, now that I type it, is maybe a bit too easy, but whatever. I find the melee classes a little more difficult (no self-heal, no pet, more evasion twitch), so I guess if I wanted to make things harder for myself I could play one of those. 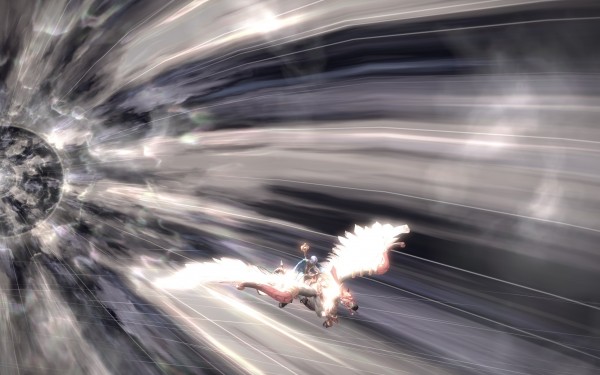 Oh. Did I mention you fast travel by flying on a pink pegasus THROUGH A WORMHOLE?

Like most modern MMOs, TERA also has a plot, which can be summed up as, “The world has been kidnapped by monsters. Are you a bad enough dude to rescue the world?” There are no factions; like GW2, the idea is that every playable race has set aside their historic differences to form an alliance and save the planet together. As someone who’s really burnt out on the WoW-style intra-faction conflict model, I’m all over this one. TERA has no real attempts at “moral complexity” or “grim darkness”. There is a plotline involving a traitor, but for the most part, you and everyone you meet is heroic and trying to do the right thing. Even this guy: 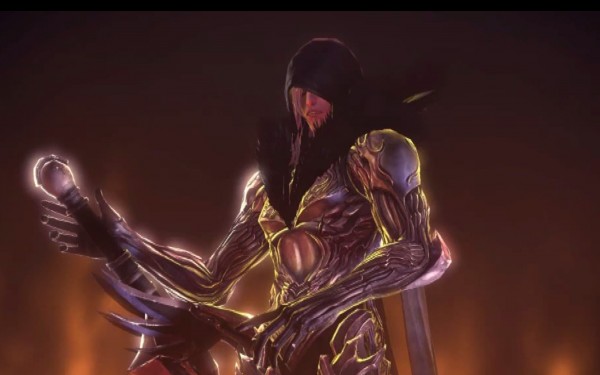 In other words, TERA is a light, enjoyable, visually appealing MMO that I think maybe shot itself in the foot a little, at least in the west, with its hyper-sexualised character models. The ironic part is the sexy models are actually done really well; cloth shimmers and moves, for example, in the way you’d expect it to and almost never see in videogames. Does this only exist to give you the possibility of a panty-shot3 while jumping over the corpses of your enemies? Of course it does. Does that detract from it? I don’t think so. I remember when I was a kid, for example, I always used to side-eye She-Ra for the way her tiny minidress magically never seemed to flash anyone inconveniently. My school uniform was never so well-behaved, and I always used to think this was because there was something wrong with me; I was Doing Dresses Wrong in some way (I was, like, six, for the record). No one bothered to explain that it was actually She-Ra that was setting the unrealistic expectation; that women be able to manage a tiny skirt with maximum activity and no flashing. It’s kind of weird to think about, but I think if She-Ra had been flashing more panty it could’ve saved me a lot of unnecessary childhood anxiety.4

Because, here’s the other thing: while the characters of TERA dress “sexy”, in the context of the world they’re presented in, it’s entirely invisible and normalised. Army commanders wear lingerie and no one so much as makes a mildly lewd comment. You can literally run around like this: 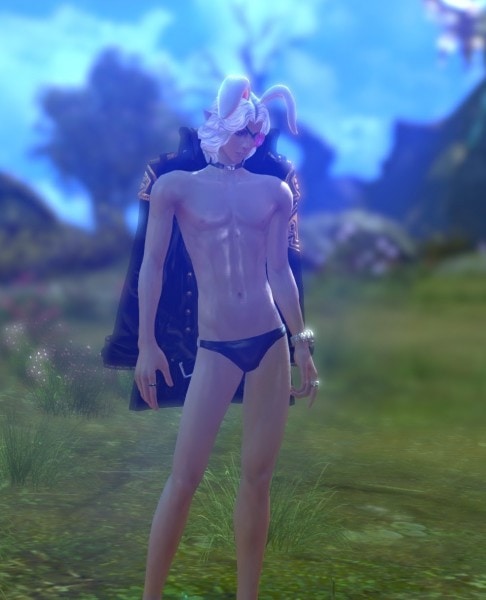 His eyepatch is a rose!

… and the only people that will comment on it or potentially treat you poorly for it will be other players.5 To monsters, you’re still the menace come to wreck their shit, and the NPCs you’re still the noble hero come to save them. There’s a certain power in that fantasy, I think. And, yeah. I don’t want it to be every game… but, I dunno. Like I said, my impulse to install TERA was literally because I wanted a change from the “practical”/”realistic” armours presented elsewhere. The fact that it actually turned out to be pretty fun beyond the cheesecake was kind of an unexpected bonus.

I guess, sometimes, you just want to save the world in a sequined bikini.