Publishing “diversity” (with an aside on The Wyrd #3).

Crane Hana on the state of diversity in publishing.

I haven’t really spoken about it much, because I’ve essentially been putting off making an “official announcement” for the last six months, but this is effectively what happened to BAD MEME, the third Wyrdverse book. It exists and is written, but didn’t push the Lain/Sigmund m/m hard enough for the publisher. BAD MEME is more of a supernatural thriller (I guess?) set in Melbourne, and while Lain is the lens through which the story is told, it’s mostly about a group of three friends–Roxx, Bich (a.k.a. Brianna), and Taylor–who make a creeypasta YouTube series called vicwalks. The antagonist of vicwalks is a monster called the Tooth Girl who, because this is the Wyrdverse, is summoned into reality by the show (hence Lain’s involvement). 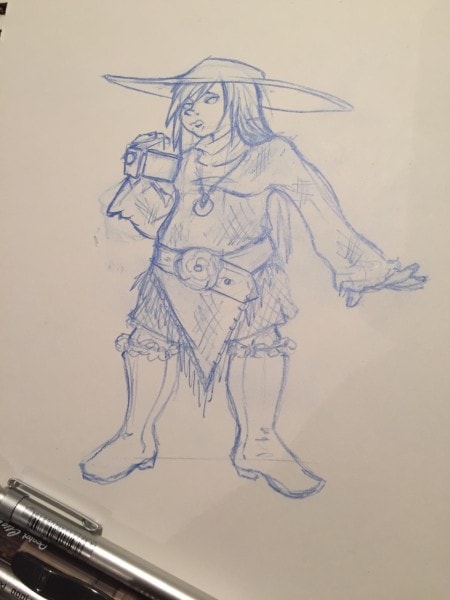 Sketch of Bich from BAD MEME.

The problem with the BAD MEME is that the entire conflict revolves around the different things Roxx, Bich, and Taylor want to get out of vicwalks. Roxx, an abuse survivor, uses the story as a way to deal with her past pain. Bich wants to be “internet famous” and get movie deals in Hollywood. Taylor is a young tans boy at an all-girls school, who’s looking for a hobby away from the suffocating femininity of his home life. Meanwhile, Lain spends most of the book as “Elle” after Bich reads his gender as female when they first meet.

So on the scale of “queer urban fantasy”, BAD MEME still fits into that box. The box it doesn’t fit into is “m/m romance”: Sigmund only appears as a cameo character in a few scenes, and the few hints of romance that do exist mostly come from Bich crushing on “Elle”.

Unfortunately for yours truly, the publishing contract for the Wyrd series was more on the “m/m paranormal” side of the scale than the “urban fantasy with queer protagonists” side. The publisher didn’t want BAD MEME as-is, and requested I rewrite large sections of the book to include Lain/Sig. I ultimately decided I didn’t want to do this; BAD MEME deals with some heavy themes (i.e. abuse survival, gender dysphoria) that I felt it would be inappropriate to sideline in favour of writing relationship melodrama between two dudes. My other option was to write another book entirely; essentially selling the fourth Wyrd book in place of the third. I outlined something (codename: TRUTHTELLER) that ended up being like 95% love triangle. The problem was it didn’t really have a villain. Because, yeah. The other thing BAD MEME did was establish the long-term antagonist for the Wyrd series.

So TRUTHTELLER got trunked alongside BAD MEME, and that was the end of that: for the foreseeable future, the Books of the Wyrd will number two.

… That turned out into much more of an update than I intended. Oh well.

Finally, for anyone who’s interested: have an excerpt from BAD MEME, in which Bich and Elle encounter the Tooth Girl. Enjoy!