One month of makeup.

So about a month ago, some of you will remember I decided to start wearing makeup. I watched some tutorials on YouTube, went out to Big W and splurged on a starter kit, and practiced dolling myself up.

This is an update on how that’s working out. In a word: surprisingly good. I… actually really enjoy it? Like, I enjoy the act of looking at different makeup products, trying to work out how looks are created, and then applying them to myself. It’s fun. Like painting is fun, except it’s on my own face in the mirror every morning instead of, like, on PhotoShop once or twice a year when I remember I did art once upon a time. It takes me about fifteen minutes to “face up” in the morning, which has been surprisingly easy to integrate into my notoriously strict morning regime (my time from bed to office is super, super low, and I usually get super, super aggro if anything interrupts it).

So yeah. Makeup. I wears it. And I’m still not a huge pro, but I’ve learnt a lot of stuff, and because I guess maybe it might be useful to someone out there at some point, here are the things I’ve learnt and, more importantly, the products I’ve been using.

As a note, these are all drugstore brands, with one exception I’ll get to in a moment. This exception aside, everything here is either Revlon and L’Oréal, which I chose because they seem to be pretty sensible Big Name brands sold at mid-range price points (also because the displays are next to each other in the Bigdub). My criteria for choosing products was that they had to be, a) long-lasting, and b) relatively subtle. That is, I was going for a “non-makeup-makeup” look, and it had to last all day. Overall, this was super successful. Yay me.

And now, for a peek inside my First Month’s Makeup Bag.1 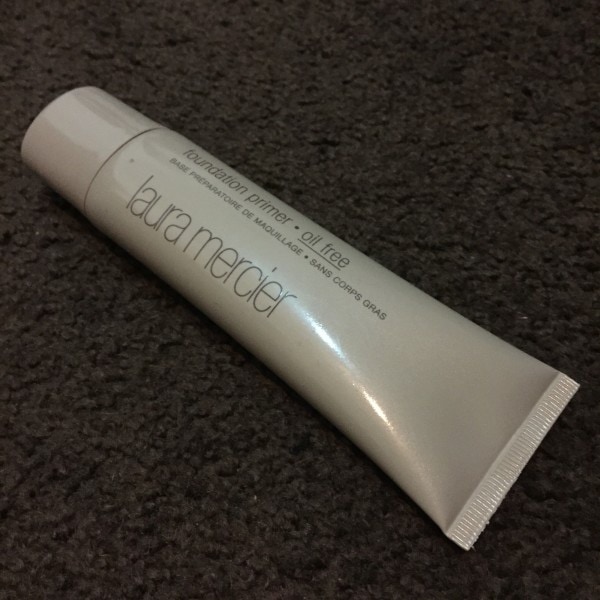 Costs a bomb. Does… not very much.

So this is the most expensive–and the only non-drugstore–makeup item I own which is a shame, because it’s the most useless.

I have oily skin. Like, super-super oily skin, which I inherited from my slavic dad. It means I tan up nice, but on the other hand: oil. So much oil. While foundation and powder was pretty good for controlling this on my cheeks and chin, I was having problems with my forehead and, in particular, nose. And by “trouble” I mean “my foundation kept rubbing off”, which, eurgh.

The interblargs told me a primer may be useful to assist with the hold, if not necessarily the oil, and I figured if there was one place to splurge, it was a good primer.

Well, apparently that was wrong, and I’m unpleased to note I notice absolutely no difference in either the application or hold of foundation with or without this goop underneath it. So that’s great.

Lessons learned: I’m not ready to write-off primer after just one go, but… yeah. Disappointed with this one. 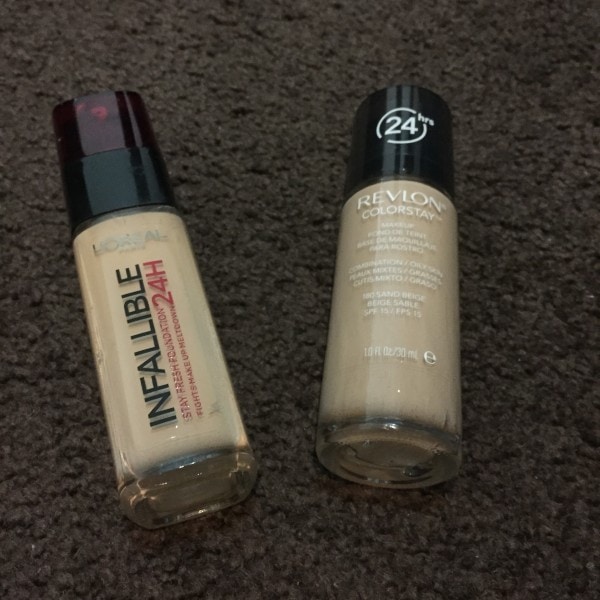 Despite the name, this one definitely goes to the Revlon.

The L’Oréal was the first foundation I bought, and don’t let the name fool you: it was not, in fact, infallible. Actually, I found it pretty greasy, with the product never really settling into my skin. I don’t want to spend the day paranoid that every time I scratch my nose I’m going to scratch a long chunk out of my make-up (eurrgh), so this one got banished to the Back of the Drawer.

I replaced it with the Revlon ColorStay, which I’m like approximately 1,000% happier with. Not quite 1,100% happier, mind you; as mentioned, I still get a bit smeary around my nose, while my upper lip often feels simultaneously too dry. But my cheeks and chin look and feel lovely, so… that’s something?

Lessons learned: Next time I go splurge at the department store, it’s going to be on a fancy-ass foundation. You cannot, I’ve learnt, “get away” with mediocre foundation in the way you can get away with mediocre lipstick or eyeshadow. I’m also going to get some makeup counter lady to color match me, because holy fifty shades of beige, Batgirl! 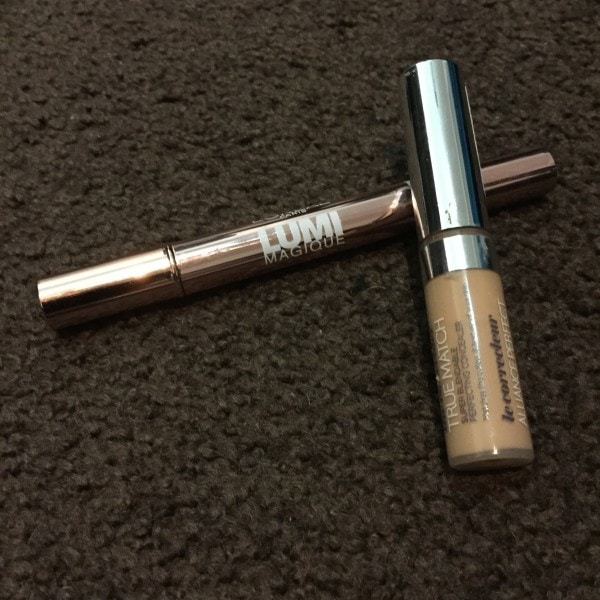 I’d never have believed it before I tried it, but here is where the fun starts. The concealer I bought first, the highlighter I added later. I’m a bit… meh on both of them, even if I love the idea behind highlighting and contouring and also covering up all my acne.2

The concealer goes on nicely and blends well, but it doesn’t wear particularly well, especially in my greasy nose region, where I’ve been using it to tone down some of the redness around my nostrils.

The highlighter… is just disappointing all round. It doesn’t blend well, doesn’t conceal well, and isn’t particularly luminescent which, for a highlighter, seems like a bit of a failing.

Hm. I’m sensing a trend here with me and L’Oréal skin products…

Lessons learned: Concealer and highlighter are fun… in theory. In practice, I’ve learnt a bit more about color as it relates to skin since buying these, meaning I’m not 100% happy with the shades (too greeny-grey, for starters). These are the other products I’d go and get up-sold by a lady at a makeup counter over. 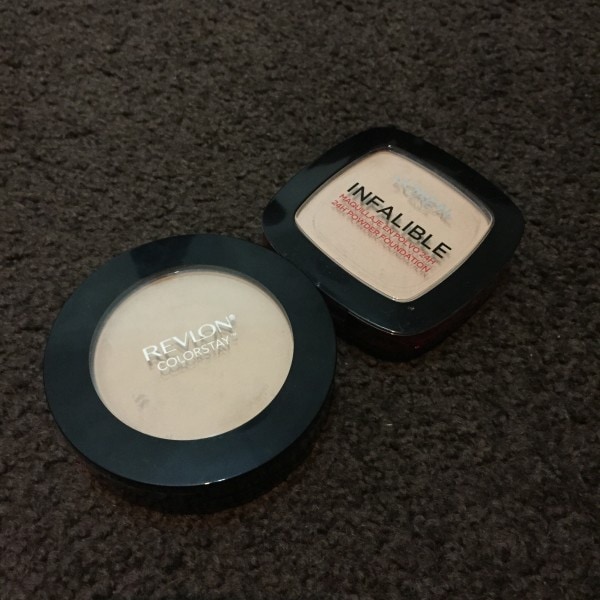 Infallible vs. ColorStay, round two!

First of all: holy shit makeup is so much cheaper in the US. WTF even.

Second of all: I’m not really sure why I went out and bought a different powder. I don’t remember being particularly unhappy with the L’Oréal, but when I replaced the fallible liquid foundation, I replaced the powder too. IDK. I think both of these are probably okay, though I wear the Revlon mostly now.

Choosing beiges is still freakin’ difficult. If you’ve noticed the shades are all over the shop, I call that “creative trial and error”. When I bought the Revlon, I was actually trying to buy a translucent powder, but apparently that didn’t work out and I only just noticed. Huh.

Lessons learned: I don’t really have one for these two. I haven’t yet leveled up enough to learn the Secrets Of The Powder (dun dun duuuun). 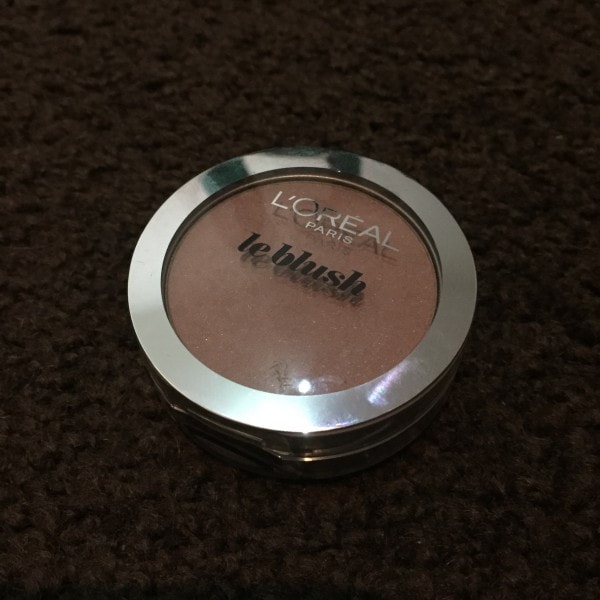 So nude it’s barely there.

The thing I learnt about Le Blush was to apply it with a decent le brush. I went out and bought myself one of those slanty blush brushes within a week, and was a scientifically proven 182.39% happier with my blush applications afterwards.

Color wise, this is basically the blush for people who’re terrified of wearing blush. Which… makes it pretty perfect for a beginner, I guess.

Lessons learned: That being said, I’d probably go for something brighter next time; pink-er or peach-er or something-er. Nude Pink is very brown-er, which makes me look very old-er when I wear it. Which isn’t necessarily bad-er, just… conservative-er. Very, very conservative. Wearing it with my pearls3 makes me want to hop in my (non-existent) SUV and pick up my (non-existent) kids from soccer practice. Oh, and next time I definitely want to try a liquid blusher, given my apparent love of painting shit on my face. 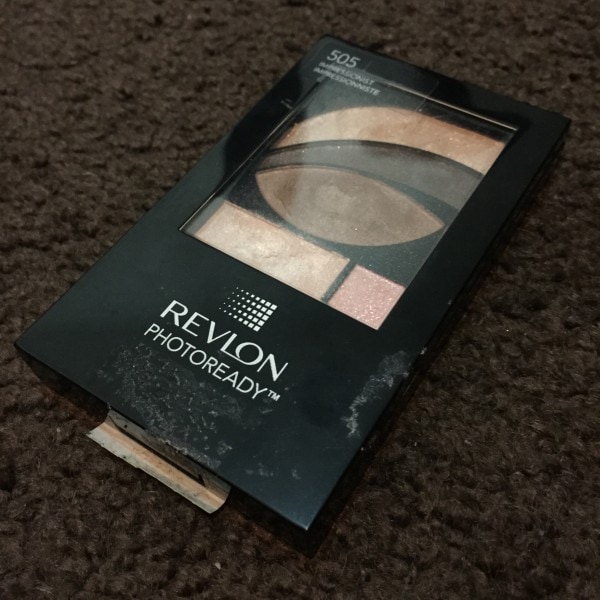 The eyeshadow to wear when you’re not wearing eyeshadow.

Of all the makeup I’ve bought so far, this is easily the one I’m the most fond of. It’s basically the eyeshadow you buy when you’re terrified of eyeshadow, which I am, because I’m freakin’ blind as a bat when I put it on due to the whole glasses thing. This palette makes everything super easy, and results in a really subtle, everyday sort of look. It’s basically perfect, in other words, and I love it.

Lessons learned: Ridiculous eyeshadow is fun, but this isn’t it. This is my I-have-to-go-to-work-and-not-look-like-a-teenage-goth eyeshadow, for which it is A++ would recommend. 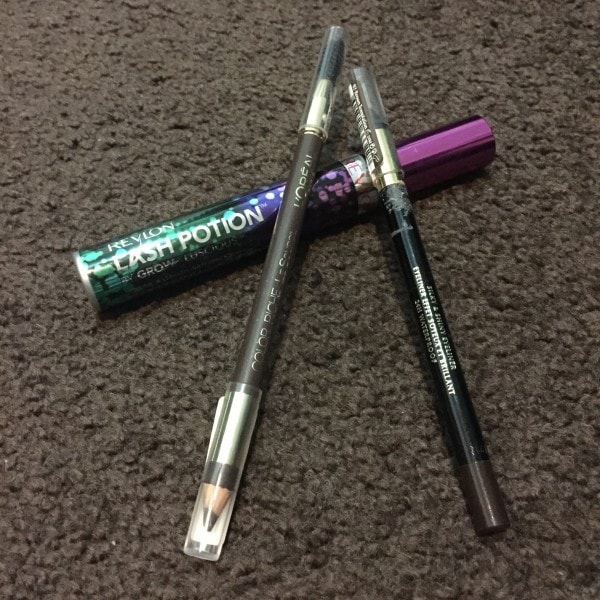 Most of this stuff I don’t use, TBH.

This is my “going out tonight” pile rather than my “going to work” pile. Yes, even the mascara. Yes, I know that freaks you out but, like, seriously. I have teeny tiny little baby lashes, so much so that I’m more likely to poke myself on the lid than actually get any of this clumpy gunk where it’s supposed to go. To say I’m not a fan of mascara would be putting it lightly.

Eyeliner is another sort of torture for me, for aforementioned reasons of blindness. I bought this particular pencil because I thought it would be easier to apply than a gel or liquid. I was wrong. It blends badly, drops out after a few hours, and is almost impossible to apply on the waterline. Basically, I only wear this if I want to end up with the “I don’t remember whose couch I slept on last night” look by about 3pm. Which, let’s be real, sometimes I do.

The brow pencil… is a brow pencil. I have some pretty naturally dark and chunky eyebrows, which I don’t pluck or sculpt, but I sketch in some of this if I’m going out.

Lessons learned: Precision eye makeup is freakin’ difficult when your Coke-bottle glasses need to be left on the counter. 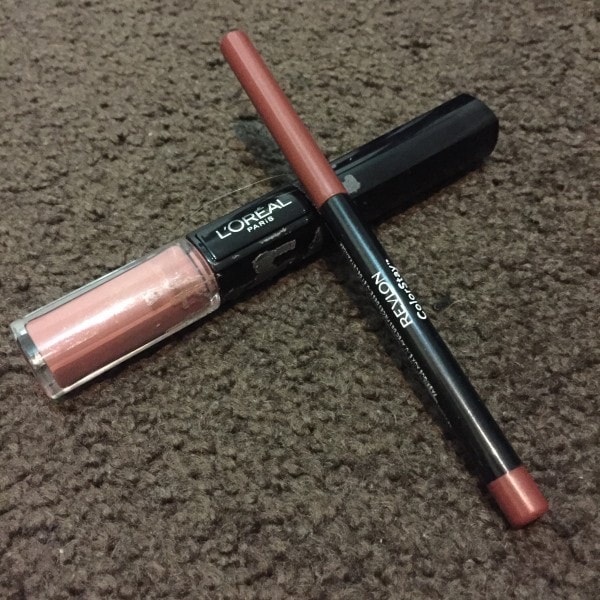 I painted my lips the colour of my lips.

If the eyeshadow is my favorite product, the lipstick is my least. The color is fine, in that it’s basically the same as my actual lips. Which is handy, because this stuff flakes and peels off weird. It’s super matte, and has been good at clearing up all the cracked and bitten skin on my lips, but… IDK. I just can’t get it to apply right, probably because I’m slapping on the sealer too quickly after applying the pigment. I’ll try… not doing that next time, I guess. See if it makes it better. If not, I’ll have to admit the Infallible range and I really just don’t get along, because that’s like none from three so far.

On the plus side, the lip liner’s pretty good.

Lessons learned: Another choice that was probably too conservative. Next time I’ll try something with a bit more color and gloss to it. 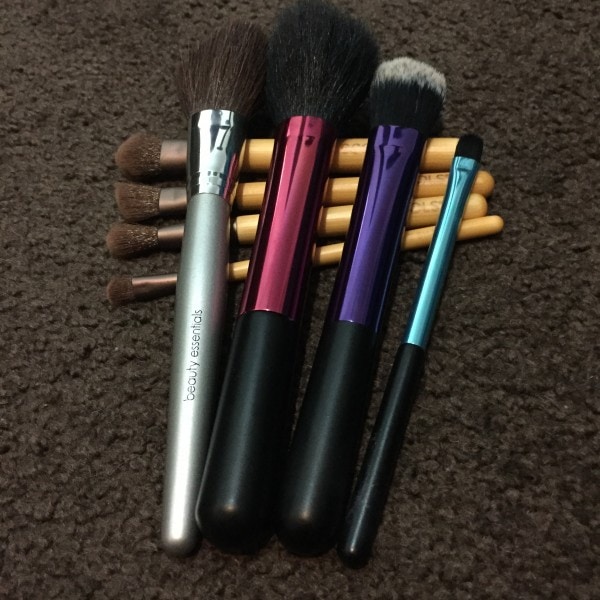 You. Need. To. Brush and I cannot lie.

Brushes. Brushes brushes brushes. If there’s one thing I’ve learnt in the last month, it’s that having the right brushes is the difference between applying makeup being a soul-crushing chore and it being happy fun painting time.

My brushes are a bit meh. The eye set from EcoTools is okay, and the travel sized handles actually work for me since I need to get so freakin’ close to the mirror to do my eyes. The blush brush I bought as a “round two” purchase, and it’s serviceable enough. The three remaining brushes I bought in a set, and promptly forgot the brand of, but that doesn’t matter much because they’re nothing special (particularly the big powder brush, which commits the cardinal sin of leaving bristles on my cheeks).

Lessons learned: Brush care! The foundation and concealer brushes I wash every day in soap and warm water. The powder and blush brushes get washed when they get too gummed up with foundation. The eye brushes get toweled off every day and washed if I’ve put on something ridiculous with them but need to go to work the next day.

And makeup. But holy shit am I buying stuff from the US next time. Looking at the prices of this stuff on Amazon is actually making me mad when I remember how much I paid for it in store. Guh…