Wow. So… yeah. October. How did that happen?

One year ago today I was, more-or-less, a nervous wreck. I had exactly one novel and about twenty rejections from literary agents, and a bunch more still sitting in the works. My thirtieth birthday was looming on the horizon, as a sort of artificial deadline I’d irrationally imposed on myself for “being an author”, like suddenly my fingers would all drop off and my brain would stop telling stories if I got to thirty-and-one-day without a publishing contract sitting in front of me.

As it turned out, that didn’t happen. I know this, because my agent’s offer of representation came four days after my 30th birthday, and, well. I still have all my fingers.

Eleven months later, and I’m staring down the release date for that novel. Back then, it was called WYRDTOUCHED.

Nowadays, it’s called Liesmith. Y’all might’ve heard me talk about it before.

So… yeah. This is the part where I prepare for things to get crazy again, I guess. Which is weird, because I still wake up every morning and get dressed and go to work–my day job, office work–and it’s like 99% of my life is still exactly the same. But that 1%…

I had a poster at a vendor booth a Comic Con. Did I mention that? #SDCC." href="https://alis.me/x/liesmith-at-sdcc/">I did, but I’m gonna mention it again. Because holy shit guys I’ve never even fucking been to Comic Con, and my fucking novel had a fucking poster up at one. Robin Hobb signed stuff in front of it. Robin fucking Hobb, man. I used to read her books when I was a kid, back when dad convinced me she was a bloke because “not many women write fantasy”. And now we’re in the same freakin’ vendor booth? What. The. Fuck. That is some serious alternate universe bullshit going on right there, she thinks, sitting at the dull beige desk in her dull beige cubicle, while somewhere off in the aether Alis Franklin, Professional Author, looks at marketing plans and promo art. 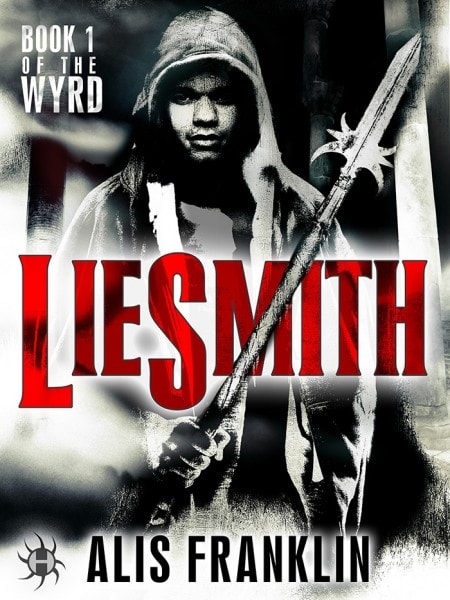 Cover for Liesmith by Alis Franklin.

So hey. Did you hear I have a book out soon? It’s called Liesmith. It’s about Loki, sort of, and the mythos of Silicon Valley, sort of, and family and identity, definitely, and love. Always love, right?

It’s about nerds and geeks and about being who you are and being proud of who you are, because who you are is pretty damn great, even the bits that aren’t.

It’s about a boy who meets a boy, and the things that happen after. It’s also about a girl, and how far she’s prepared to go to rewrite a story she doesn’t like.

It’s about a seven foot tall anthropomorphic archaeopteryx, and a talking raven, and walls made from flesh, and a pair of goths, and the gods of death.

It’s about a guy who couldn’t shoot the broad side of a barn from five paces. Watch that one, it’s a spoiler.

But mostly, Liesmith‘s about having fun. I had fun writing it. And maybe, just maybe, if I’m lucky, you’ll have fun reading it, too.

If all goes to plan, Liesmith should be out next week, on October 7. If books about queer geeks, geeky gods, and Norse mythology are your thing, you might like to shelve the book on GoodReads (where you can also read a bunch of early reviews). If you’re feeling even more generous, you might even like to preorder:

As they say in publishing: more soon.

It’s gonna be one Hel of a month…