I survived #Conflux12 and all I got was…

So yeah. I survived my second year of Conflux; go me!

Special big shout-outs this year to:

I didn’t end up going to very many panels this year, mostly because I kept getting sidetracked by ranting at people in the bar (lots of ranting . . . lots and lots of ranting). On the other hand, I did get to do a workshop on the Friday where I had to create a YA character and book plot on the fly while being live critiqued by a panel of teenagers, and that was kind of traumatising, not gonna lie, so I pretty much needed the rest of the three days to recover.

Since it wouldn’t be a Conflux without a book haul, you can find the full list at GoodReads. I’m super-jazzed about Tansy Rayner Roberts‘ Mocklore books and Kaaron Warren‘s The Grief Hole in particular (and also super-jazzed that I got them signed). Tansy’s one of those people I secretly stalk online and absolutely fail at talking to in real life because I’m too busy dying of squee, while I fell in love with Kaaron’s writing after the last Conflux because ohmigod Australian female horror writer gimmie gimmie gimmie.

My other discovery this year was Meri Amber, who’s both adorable and writes adorable geek-pop you should totally go and listen to. She’s also the one who sold me my single most expensive purchase of the con: a set of metal rainbow Level Up Dice. Because seriously nothing says “beware the DM” like when she destroys your dining table by rolling her razor-sharp, heavy-as-shit, candy-coloured metal dice across it. 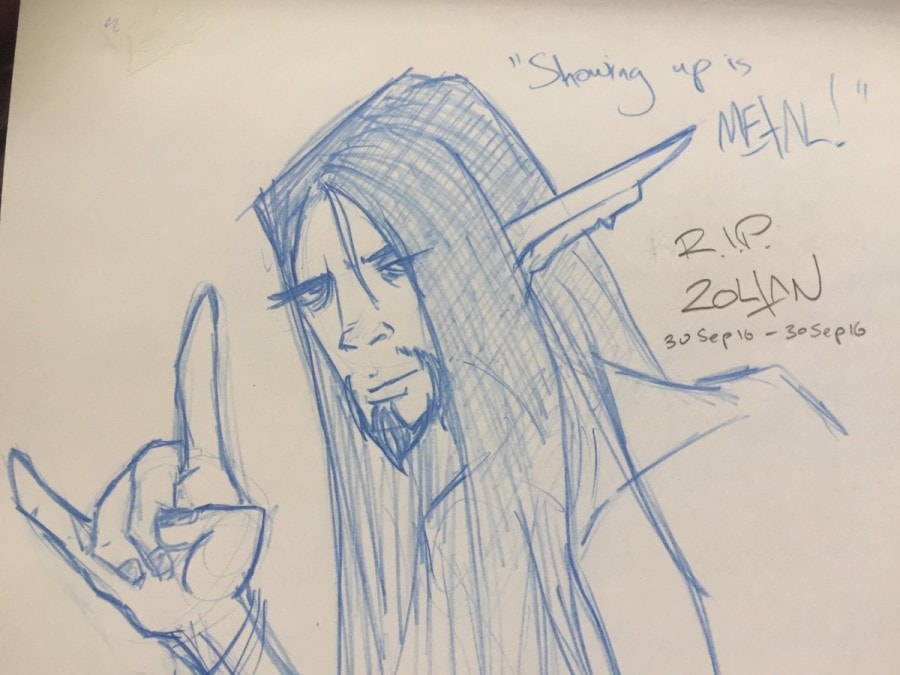 Zoltan the Dungeon World Bard says, “Showing up is METAL!”

Metal was actually a bit of a theme of the con, I guess. Poor Zoltan, the Elf Bard with the power of METAL!. We hardly knew ye. (Also, I’m kinda glad you got killed off halfway through because holy shit was my voice wrecked from death growling the next day. Good thing I had no panels on the Saturday!)

Oh, and next year? Next year, we’re getting ribbons.