How to write 5k words a day without really trying.

“You must have a lot of free time on your hands.”

It’s 8pm on a Tuesday, and I’m at our local novel writing workshop. It’s my first time there. The workshop is on story structure and the practical applications thereof–something I, a recovering pantser, find endlessly useful–but we’ve been sidetracked into talking about how many words we tend to write per day.

“If I’ve got a project deadline,” I paraphrase later for context, “I’ll try and do at least five hundred. But on a good day I can easily do three to five thousand.”

The woman across the table from me looks me dead in the eye, and that’s when the line comes out: You must have a lot of free time on your hands.

Well… no. I don’t, really. Not much more than anyone else, anyway. I work a full time day job, like most writers nowadays, as well as have the standard second shift of household duties. I don’t have kids, true, so that helps, but I have a socially gregarious husband and friends who live across the road and like dropping around and the bottom line is I actually don’t spend all that much time sitting down in front of my laptop writing writing. At least, not five thousand words a day’s worth.

Back in 2009, when I was powering through what would eventually become Liesmith for NaNo, I read someone on the forums talking about their intent to do their NaNo project primarily on their new iPhone. At the time, I thought they were crazy; write a novel? On an iPhone? On the other hand, I had myself just gotten an iPad, and it fit in my handbag, and I started taking it to work. Every lunchtime, I’d take my lunch and my iPad and sit for half an hour in the park and write a scene. A month later, I had fifty thousand words.1 I also got really, really good at typing on the iPad.

And, I got a workflow.

Like a like of writers, I do most of my project work in Scrivener. Scrivener’s iOS version is notoriously delayed, but the app’s had external file syncing capability for ages. And if there’s one thing there’s a million of on iOS, it’s text editors. So I started combining the two, using Dropbox to sync in the middle. It ended up working surprisingly well, particularly given the versioning on both the Dropbox and Scrivener ends (to fix any, uh, mis-syncs).

At some point in there I also started to throw my iPhone into the mix. Originally it was for editing. I’d whip out my phone during any sort of “dead time” in my day–standing in line, sitting on the toilet, waiting in waiting rooms, lying in bed–and read and re-read whatever I’d just written. I’d start with fixing little things in the text, just the odd typo here and there, but eventually started working up to re-writing whole sentences and even paragraphs.

And then I’d get to the end of whatever I was editing and… just keep going.

Nowadays, I probably do about 60-90% of my novel writing on the iPhone. I won’t lie; it took me a while (a long while) to get good at typing on the teeny tiny screen. But now I can lay down a few thousand words no problem. Because the thing is? All that “dead time”? It really, really adds up. Like really really.

So how does the whole process work? (And note that all of this is OS X and iOS, but the general principles should apply no matter what platform you’re using.)

Where the magic, uh, goes to sync?

Most of the settings here don’t matter, except you’ll notice the formatting is all in plain text.2 Scrivener can sync as RTF documents, but I find editing RTFs on the iPhone a pain in the ass. Really the only formatting I do when I write is put in some italics. Lucky for me, Scrivener supports Markdown. All you need to know about Markdown and Scrivener is that, a) to make something italic you put asterisks around it, and b) you need to make sure this box is checked in your Compile settings: 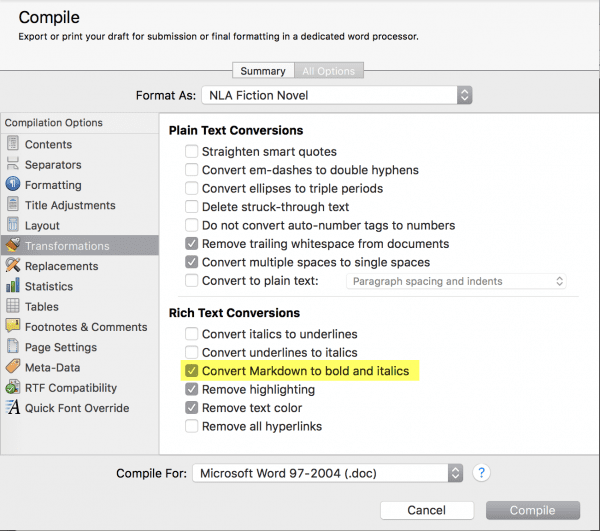 And that’s it. Any other “fancier” formatting, I do by hand in the exported manuscript.

The next thing we need to do is set up a sync:

Stick it somewhere in your Dropbox, though be aware that the exact location might depend on the text editor you choose on your phone. I’d recommend in some folder structure along the lines of Notebooks/Manuscripts/MyProject, for reasons I’ll describe below.

The two ticky boxes on the sync screen that I’d absolutely make sure are set are Prefix file names with numbers, because it makes everything much easier to order, and Take snapshots of affected documents before updating, just in case you accidentally overwrite something you don’t want to overwrite. Also remember to set your file export type to Plain Text.

When you’re done, you should have something in your Dropbox that looks like this:

Except with your scene names, obviously.

So that’s the first half done.

The next half, you need to do on your phone.

First thing you need to do is get yourself a good, Dropbox syncing text editor. I’ve been through like twelve thousand of these, but at the moment I use good ol’ Notebooks because, a) it lets me sync with Dropbox, and b) lets me set my own fonts, which is important to me.

Actually setting up Dropbox sync in Notebooks is kind of a buried option, but it’s in Settings (the “sun” icon in the bottom left) › Import, Export, Sync › Dropbox. Tick the slider to on, then go into Settings to connect your account. You need to point the Dropbox Folder setting to wherever you exported your Scrivener files to before, which is why I recommend burying things in a subfolders named things like Notebooks/Manuscripts/Project1, Notebooks/Manuscripts/Project2, and so on (in this instance, Dropbox Folder would be set to Notebooks/). Make sure that Sync over Mobile Network and Sync Automatically are checked.3 I would also turn off Try to Resolve Conflicts. Notebooks, bless its soul, isn’t great at working this out, and I’ve lost a good ten thousand words over the years to it guessing wrong. With the option unchecked, it’ll always ask if it isn’t sure.

Anyway, you might have to pull-to-refresh a bit, but eventually your Manuscripts folder should appear: 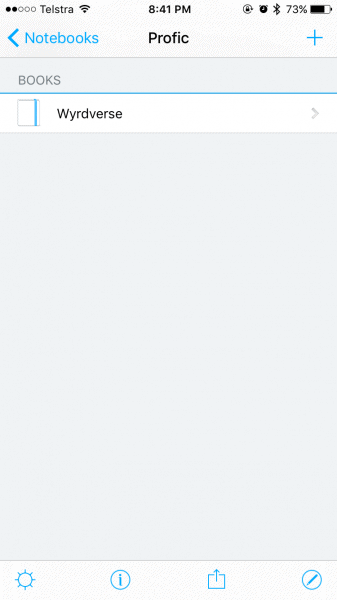 Or “Profic”, as I called mine, because I don’t take my own advice.

Navigate down the tree, and eventually you’ll see:

One of the things I like about Notebooks is that, if you pull down on this screen, you’ll get a bunch of sort and search options. Handy!

Open one of the files and you’ll see: 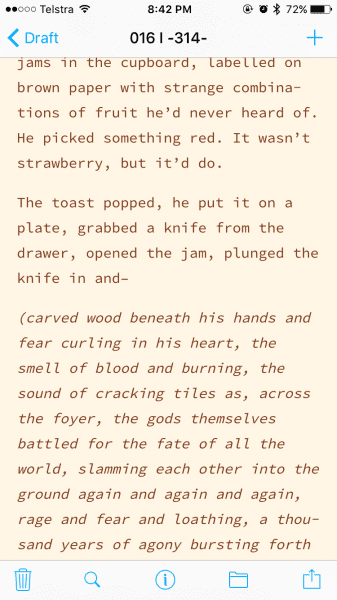 And it even recognises the Markdown!

Because Notebooks is hip, it auto-formats Markdown, but if you start editing you’ll get your asterisks back.

Note that your Notebooks probably won’t look exactly like mine. The other other cool thing about Notebooks is that it has a lot of formatting options (Settings › Write and Edit), so you can make your text look basically however you want. If you want to write your entire manuscript in Papyrus, then go right ahead. I guess. 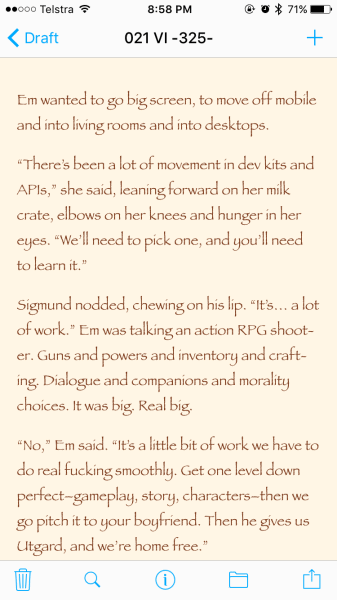 You absolute monster, you.

And that’s basically it! Write and edit to your heart’s desire, make sure your files save back to Dropbox, then go back to Scrivener and hit the Folder Sync button (if this isn’t on your toolbar by default, it lives in File › Sync › with External Folder Now).

And, yeah. Basically this is how I can write an entire novel in a fortnight.4 Go me! And now go you, too!