Firewatch and the art of moving on.

So the other week I played Firewatch.

I am sick of this child getting more and more chances to make money off of what we make.

It’s courageous, I think, for an indie games dev to go up not just against a “big name” streamer, but also the hordes of slavering anime Nazis and freeze peach snowflakes who’ll follow in his wake. And for all the hand-wringing about the DMCA being a piece of shit legislation–which is kinda is, and yes, I’ve been SLAPP‘d with it before–this sort of situation is exactly what it was designed to protect against. I love a Let’s Play as much as the next gamer, but the notion of streamers being entitled to make millions off other people’s copyright is… pretty much exactly not how copyright law works.

Anyway. That’s kind of an aside. Here, have some screenshots. 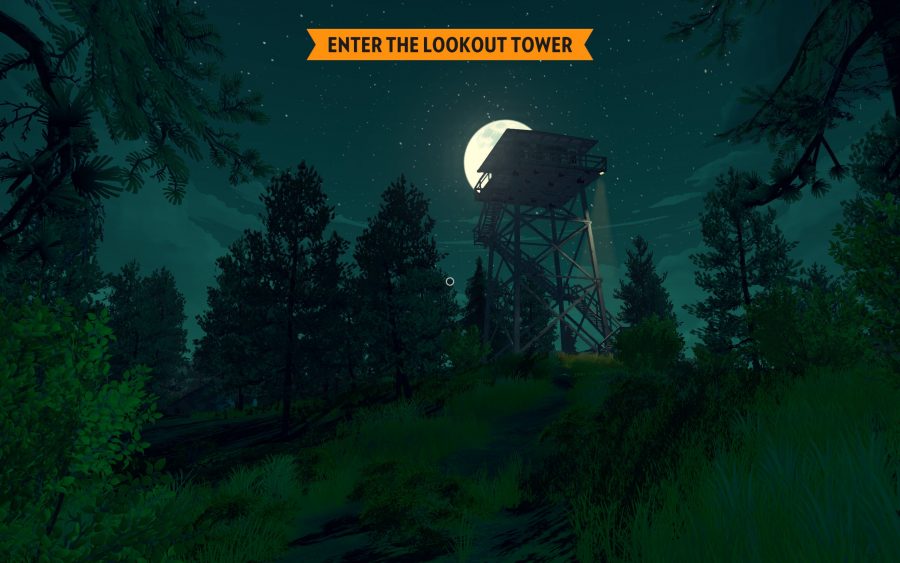 So. Firewatch. I literally went into it knowing nothing other than some vague thing I’d read ages ago about neurodiverse people finding its map system difficult and exclusionary.1 I didn’t even know what genre the game was, or what sort of gameplay to expect. I definitely think going into the game “cold” changed my expectations of it; in retrospect, I think there are sections I’d find less engaging if I’d known more about the game, which is also my way of saying if you haven’t played it, you totally should go do so first, then read the rest of this review.

Here’s some more screenshots to tempt you while you go do that. 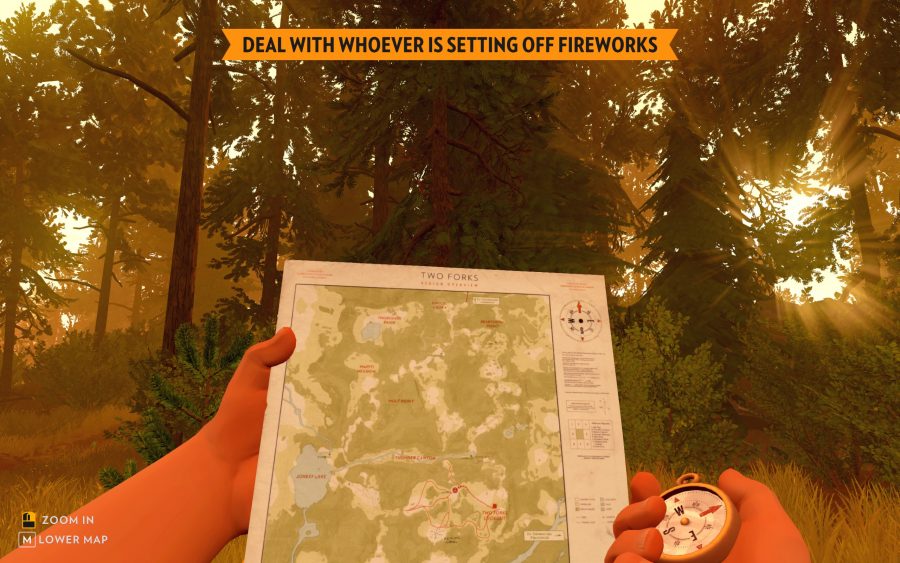 The map and compass.

Okay, back? Cool. First of all, as you have now figured out: this game is fucking beautiful. I have a special fondness for the sort of painterly, cartoonesque-but-semi-realistic art style of Firewatch, so I pretty much spent my entire game taking screenshots (shots with the in-game camera were mostly reserved for plot-related developments). The lighting and the color in Firewatch is amazing, so full props to the art team for… basically everything, from the forest to all the little “human” details in Henry’s watchtower and the various other human settlements.

Props too to little details of the game engine like being able to “tidy up”. I’m used to pick-up-and-drop object physics in games, but the fact Firewatch allows you to both drop and to neatly put back items is a small touch but, I think, extremely poignant given the rest of the game’s plot. The photo of Henry and Julia that keeps getting displaced? Do you keep returning it? Leave it on the ground? Put it in a drawer? Whether or not this choice has a direct plot impact, the ability for the player to perform it in the first place changes the relationship with the protagonist and, thus, the game itself.

Cue “are videogames art?” discussion, round one million.2

Because Firewatch is, let’s face it, all about you-the-player and your relationship with your protagonist, Henry. Spoiler alert: I love Henry, in all his quietly sad, bear-y stylings, and am massively bummed that the game faded into a cutscene before I could take a screenshot of its Most Important Scene. 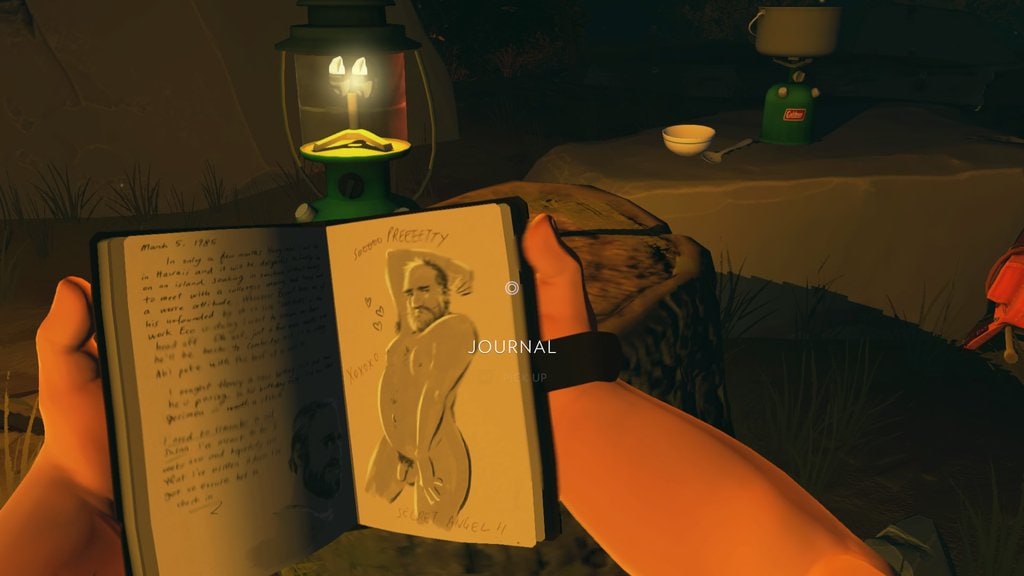 So here. I stole it from a Polygon article instead.

Delilah is also a treasure, and I loved her relationship with Henry; these two broken and imperfect people living in isolation in the woods, each trying to recover and heal in their own way.

I suppose there are different ways you can play Henry, but mine was a gentle, awkward soul with a dry sense of humor and a loving awe of the world around him. Someone who’d experienced a terrible loss, and had made difficult and imperfect choices, but by no means a bad person.

And, look. Here’s is where we have to finally get around to addressing the fire in the room. That is: the game’s ending. And, basically, how it… didn’t work for me. 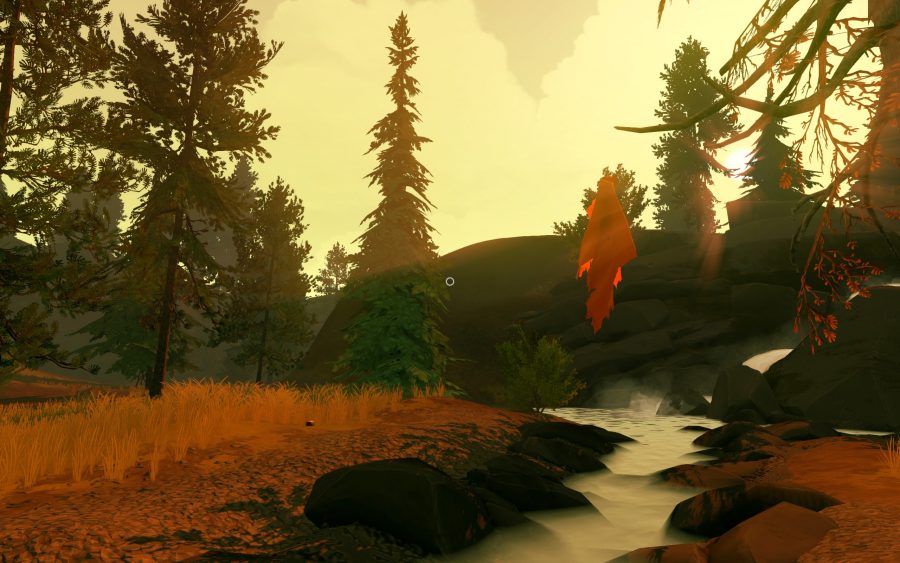 A clue? Or just litter?

It didn’t work for a lot of people, it seems. It’s Dragon Age 2 all over again; a game that plays with your expectation of being The Hero3 and then pulls that away in the final act. Except that part? That part I didn’t mind. In fact, I liked the idea that the game’s denouement is really that there’s nothing untoward going on, and that Henry is out there chasing mysteries as a way of distracting himself from the pain of his wife’s dementia. I won’t lie: the game made my cry. Multiple times. In fact, I’m tearing up right now remembering it. And, like, I love a good murder-mystery-horror-puzzle as much as the next gamer… but the level of emotional connection Firewatch managed is both far rarer and far more precious. And it has no need for any sort of gamified adornment. 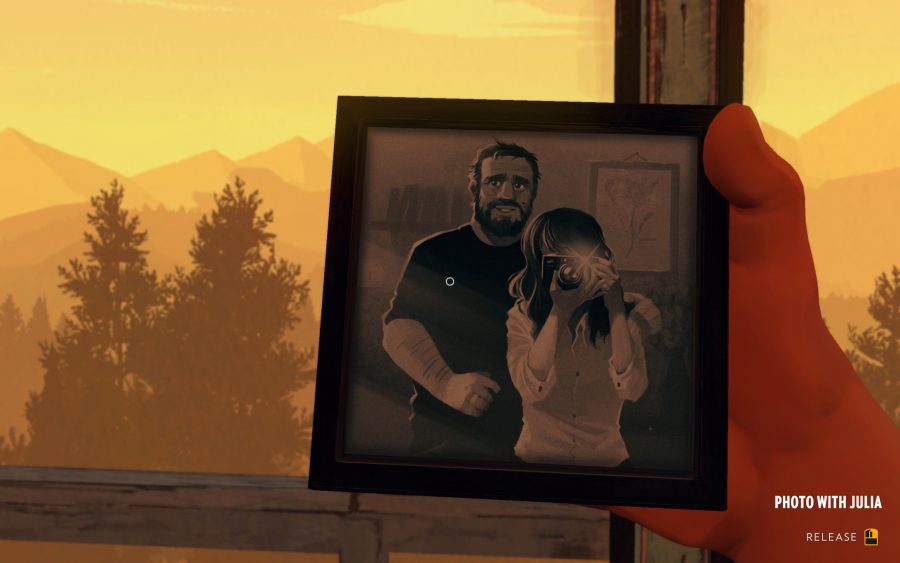 That being said: I still didn’t like the ending. So why not?

Well, because I’d just spent the last three hours of gameplay reading Henry’s experiences as him trying to move on the from the pain of his wife’s illness. So it’s… kinda freakin’ jarring to run into the game’s wallbanger of how this is the morally wrong decision and that your experiences in the woods aren’t healing, they’re “running away” (you selfish asshole you).

In other words, I’m a wife, not a husband. 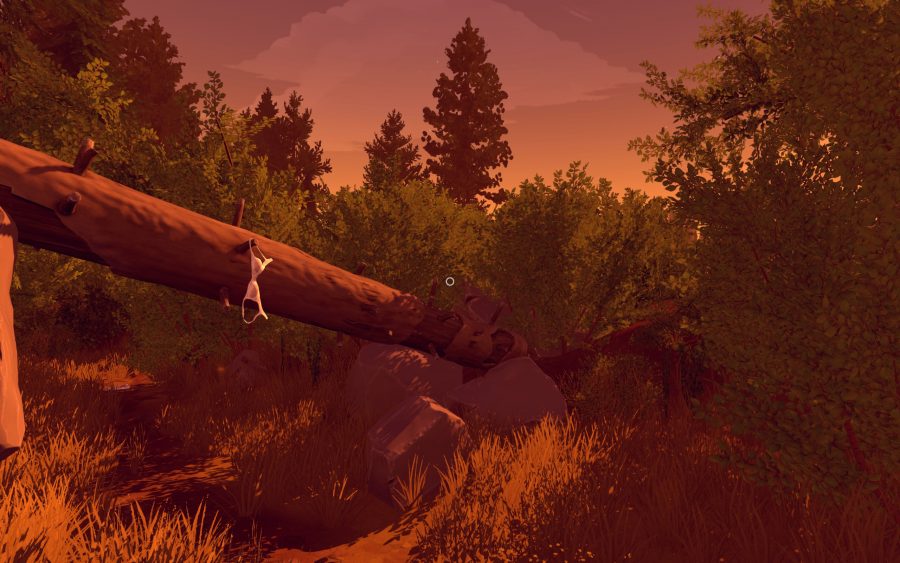 Uh… did someone forget something?

And maybe this is the difference. Because the whole time I’m playing Henry in Firewatch–empathizing with his pain and thrilling at his adventures–I’m not thinking about what I’d be doing if my wife was slowly fading away on another continent. I was thinking about what I’d want for my husband–my actual IRL, really real husband, Mat–if I’d succumbed to an incurable, irreversible4 illness. I’d want to be cared for (Julia is with her family). I’d want Mat to remember me (Henry keeps his wedding ring on, he replaces Julia’s photo). And I’d want Mat to move on; to not waste the rest of his life in guilt-ridden depression for something he can’t change and didn’t cause.

Hence being in the forest. Hence adventures. Hence awkward attempts at flirting.

For all that it is relatively open-ended, however, Firewatch definitely gives the sense it doesn’t “approve” of this reading. Ditto most of its defenders, from what I’ve seen, and I think it’s probably no coincidence that Firewatch‘s writing team was all-male.

And, to be clear, I definitely don’t think Firewatch‘s ending makes it a bad game; it’s a thoughtful exploration of illness, loss, guilt, isolation and, potentially, recovery, and I think what it does, it does well.

I just don’t agree with what it’s saying.

Damn but if it doesn’t say it beautifully, though.