Everything wrong with science fiction is John W. Campbell’s fault.

You know how, like, sometimes you make a dumb joke on Twitter, aiming directly for Hot Take territory . . . and then you step back a moment and think, “Hold on . . .”

This is about one of those moments.

Who the frick is John W. Campbell anyway?

This is, I think, a reasonable question for anyone, a) under the age of like 50, and/or b) with no particular interest in the History of Science Fiction as a genre.

Very broadly, Campbell was an American dude involved in the science fiction community circa the 1930s to 1960s. As an author, he is probably most notable for his novella Who Goes There?, which you probably know in The Pop Culture Zeitgeist as the inspiration for John Carpenter’s 1982 horror masterpiece, The Thing, a rough summary of which may be found in the following Pingu-based claymation adaptation.

Which, yanno. Awesome. Unfortunately, Lee Hardcastle’s Pingu’s The Thing aka THINGU may, in fact, be Campbell’s only decent contribution to the entire SFF genre; a nuclear-level take I will now attempt to nominally defend.

Because, you see, when Campbell wasn’t inadvertently inspiring YouTube creepypastas made forty-one years after his death, what he was actually mostly renowned for was being the editor of premiere “Golden Age” science fiction magazine, Astounding Science-Fiction, later Analog, as well as its short-lived fantasy counterpart, Unknown. More importantly, Campbell is credited as being the man who fostered the careers of pretty much ever notable author of mid-century science-fiction—e.g. Isaac Asimov, Robert A. Heinlein, and Arthur C. Clarke—and, as such, the shape of all modern English-language sci-fi to this day. 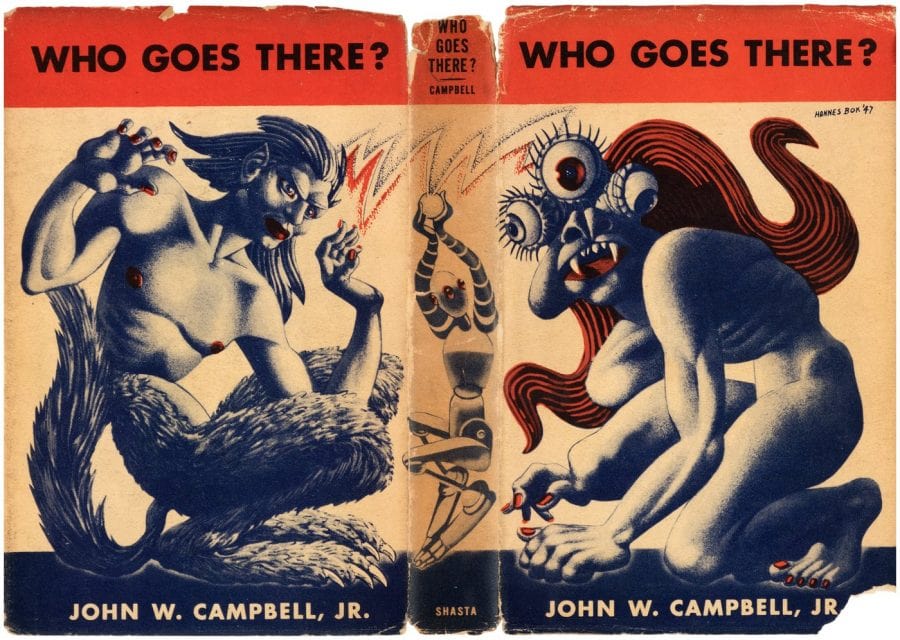 Campbell was basically a racist garbage-person.

Campbell supported slavery. And segregation. And believed black people were inherently intellectually and culturally inferior to whites. You know that whole, “But how could you possibly expect readers to empathize with a black protagonist?” thing? Something Campbell quite famously told Samuel R. Delany, in quite possibly its first documented incarnation. That whole “I don’t care if they’re white, black, or polka-dotted” thing white people say when they’re trying to pretend they’re not being racist? Campbell, while making apologetics for slavery no less, which was something he got up to a lot.

Delany, in his own words about the incident mentioned above:

On February 10, a month and a half before the March awards, in its partially completed state Nova had been purchased by Doubleday & Co. Three months after the awards banquet, in June, when it was done, with that first Nebula under my belt, I submitted Nova for serialization to the famous sf editor of Analog Magazine, John W. Campbell, Jr. Campbell rejected it, with a note and phone call to my agent explaining that he didn’t feel his readership would be able to relate to a black main character. That was one of my first direct encounters, as a professional writer, with the slippery and always commercialized form of liberal American prejudice: Campbell had nothing against my being black, you understand. (There reputedly exists a letter from him to horror writer Dean Koontz, from only a year or two later, in which Campbell argues in all seriousness that a technologically advanced black civilization is a social and a biological impossibility. . . .). No, perish the thought! Surely there was not a prejudiced bone in his body! It’s just that I had, by pure happenstance, chosen to write about someone whose mother was from Senegal (and whose father was from Norway), and it was the poor benighted readers, out there in America’s heartland, who, in 1967, would be too upset. . . .

It was all handled as though I’d just happened to have dressed my main character in a purple brocade dinner jacket. (In the phone call Campbell made it fairly clear that this was his only reason for rejecting the book. Otherwise, he rather liked it. . . .) Purple brocade just wasn’t big with the buyers that season. Sorry. . . .

Campbell’s racist views had a stifling effect on his writers even in the 1940s – Asimov said that one reason his stories never featured aliens was because Campbell would always insist that humans were superior to aliens, because he couldn’t cope with a worldview where white American men weren’t the best, so the left-leaning Asimov just didn’t write stories with aliens in, to avoid the problem.

To put it another way, Campbell was a white supremacist and an American imperialist, even by the standards of his day.1 Oh, and he believed in pseudoscience, and was an early champion of L. Ron Hubbard’s Dianetics, i.e. the book that would later become the foundation for Scientology (although, to be fair, Campbell later disowned the association). In other words, father of “hard sci-fi” my ass!2

He sure did. For example, Isaac Asimov, whose

proclivity for groping women was so widely known that in 1961, the chair of Chicon III wrote a letter inviting him to give a lecture on “The Power of Posterior Pinching”.

Marcus Ranum recalls confronting Asimov at a Worldcon some 30 years ago, after Asimov groped his girlfriend in an elevator. The convention kicked Ranum out. In their view, the true crime wasn’t Asimov’s harassment, but Ranum’s complaint about it.

Heinlein wanted to use inversion to show the evils of ethnic oppression: he took a middle-class white family and, via a nuclear explosion, threw them into a future where Africans rule the earth and enslave whites. So far, so good. Yet Heinlein’s Africans aren’t just a master race, they also castrate white men, make white women their concubines, and eat white children (white teenage girls being especially tasty). Preaching against racism, Heinlein resurrected some of the most horrific racial stereotypes imaginable. Farnham’s Freehold is an anti-racist novel only a Klansman could love.

And that’s not even mentioning Heinlein’s far-right authoritarian political streak, nor his woeful misogyny.

If you deny any affinity with another person or kind of person, if you declare it to be wholly different from yourself—as men have done to women, and class has done to class, and nation has done to nation—you may hate it, or deify it; but in either case you have denied its spiritual equality, and its human reality. You have made it into a thing, to which the only possible relationship is a power relationship. And thus you have fatally impoverished your own reality.

You have, in fact, alienated yourself.

This tendency has been remarkably strong in American SF. The only social change presented by most SF has been towards authoritarianism, the domination of ignorant masses by a powerful elite—sometimes presented as a warning, but often quite complacently. Socialism is never considered as an alternative, and democracy is quite forgotten. Military virtues are taken as ethical ones. Wealth is assumed to be a righteous goal and a personal virtue. Competitive free-enterprise capitalism is the economic destiny of the entire Galaxy. In general, American SF has assumed a permanent hierarchy of superiors and inferiors, with rich, ambitious, aggressive males at the top, then a great gap, and then at the bottom the poor, the uneducated, the faceless masses, and all the women. The whole picture is, if I may say so, curiously “un-American.” It is a perfect baboon patriarchy, with the Alpha Male on top, being respectfully groomed, from time to time, by his inferiors.

It isn’t one thing, it’s everything.

The problem with Campbell’s legacy, then, is one of ideological gatekeeping or, if you will, a kind of conservative, American, white male identity politics. It’s not about liking any one book, or story, or magazine. It’s about looking at the works and the attitudes and the actions of both Campbell and his protégés and it’s about wondering what voices, what stories, what perspectives they were keeping out. How many women encountered Asimov at a convention, left humiliated and angry, and never returned to the community? How many people of color had Campbell tell them their stories “weren’t relatable” and stopped writing because of it? How many people encountered Heinlein or Clarke or Hubbard and . . . yikes. Just . . . yikes.

Maybe more importantly: what would science fiction, that literary genre most famously invented by a teenage girl, look like today if it hadn’t been shoved so thoroughly into such tiny, parochial little box by the decades-long shadow of John W. Campbell?

Good question. And it’s something I think we’re starting, just starting, to maybe find out the answer to, nearly half a century after the man’s death. And here’s the last thing, because maybe Campbell-the-man has been largely forgotten by modern readers, but his name lives on in the John W. Campbell Award for Best New Writer, a.k.a. the not-a-Hugo, a.k.a. the Campbell. Arguably the most prestigious award for new speculative fiction writers, and given out annually at the WorldCon.

One other thing. Here are the last decade’s worth of winners:

And I’m not sure if it’s darkly ironic or not that the vast majority of these authors won an award named after a man who, to put it bluntly, would almost certainly have rejected them out-of-hand.7 These are talented authors. Don’t they deserve better?

I think they do. Which is why I can’t help be reminded of the whole World Fantasy Award H.P. Lovecraft bust . . . thing that went on a few years ago. And, well . . . I’m not saying that maybe it’s time for a similar conversation about the Campbell, but . . .