Digging through old scene summaries can be dangerous… 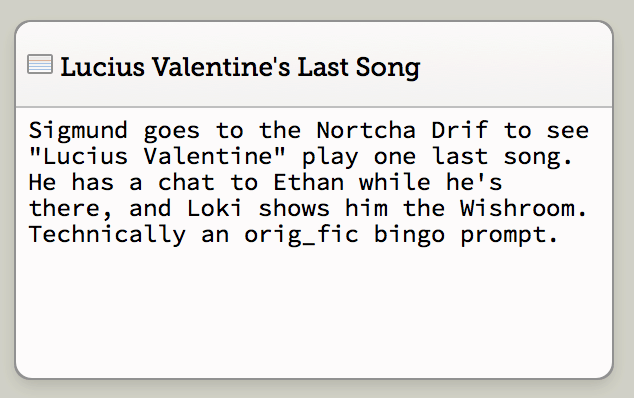 Rummaging around looking for something in my old Liesmith Scrivener file. I have a folder in there which contains all the outtakes and scenes that didn’t make it into the final manuscript. This is one of them.

The date on this is from 2010. I know the Nortcha Drif is a bar/nightclub; it’s named after (a mishearing of the lyrics of) the song Tom Cruise!Lestat sings in the Interview With the Vampire film. Lucius Valentine is an alias of Lain, who was the local mini-celebrity frontman of the band 1000 Years Underground. Lain used to get called Loki a lot more back in this daft. The Wishroom is a place in the Drif, and used to play a role in the Lain-as-the-god-of-Pandemonium-City mythos.

But the thing that gets me about this summary, is that I have absolutely no recollection as to who “Ethan” is. Like, seriously none.

Pretty much all of the Nortcha Drif references got cut from the Wyrdverse before the final draft of Liesmith went out on submission, but it used to be a big part of the story. It was also a location I used in my high school era Vampire: the Masquerade game, as the main hangout of the protagonist characters who lived (presciently on my part, as it turned out) in a town near Seattle.1 The Drif was located in an old gothic church, because of course it was. It’s essentially what happens when you design set locations at age sixteen.

Nowadays, it’s been superseded by The Nerd Shop/Minotaur and Metaverse Book and Comic [sic] in Diamond Square, which are all thinly veiled references to real places. Because of course they are.