I’m back! I survived!

So this is my third Continuum in four years, and even in that short time the con has changed quite a bit… for the better. The programming this year was especially excellent, moving into more meaty takes on topics and the “Deep Dive” stream, which was basically two twenty-minute single-person presentations back-to-back, followed by a Q&A.

For panels this year I decided to combine my habit of sketching during the talking with my general desire to take notes/livetweet. I’m not entirely sure the end results are legible in any way, but I’ve included them below, with advanced apologies to all the panelists I attempted to draw…

Because I am Bad At Flights, I missed Friday programming and didn’t get in to the con until Saturday, so this was my first panel. It was absolutely packed, and I spent way more time scribbling notes than panelists… 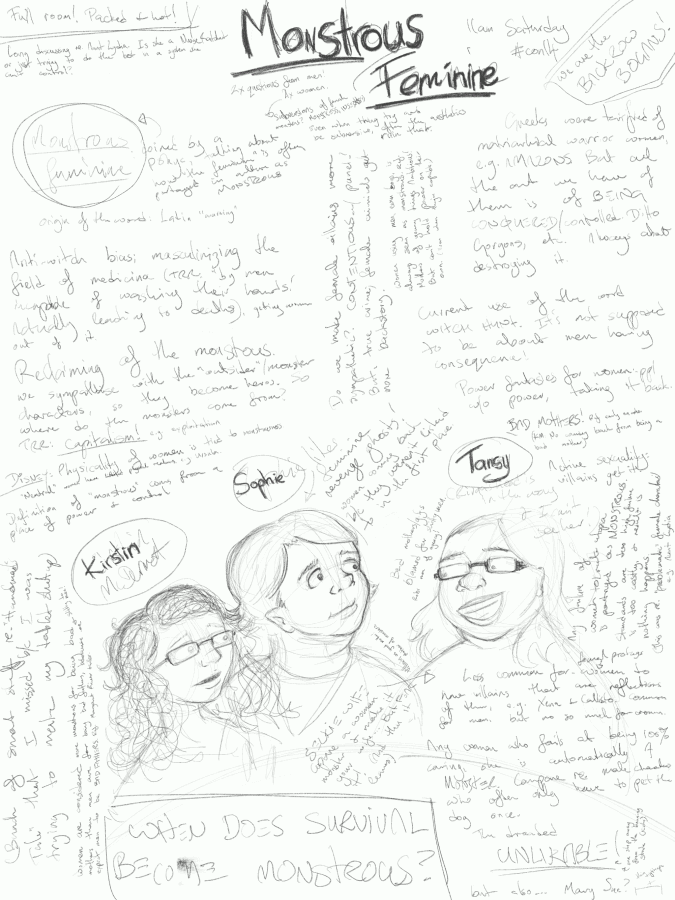 Cat is the Official Unofficial Con Photographer (I’ve certainly stolen some of her photos to illustrate previous con posts), as well as being an author and all-round lovely person. Her GoH speech focused on her photography, both of her growing up in SFF fandom in Australia and of SFF growing up around her.

Still messing around with different brushes in Procreate, trying to find what works for me for both sketching and writing (spoiler alert: nothing, apparently)…

On the plus side, I got a bunch of book recs!

Aaaah I launched Mother of Invention with cupcakes and my mum and sisters and daughters and so many wonderful friends, thank you all ??? pic.twitter.com/2FtDZjsM3e

This was the book launch for Rivqa and Tansy’s gender diverse AI anthology they Kickstarted last year. There weren’t actually any books at the book launch (all the backer hardcovers were in the mail), but we did get cupcakes, which is always the important thing. Plus Tansy tricked a bunch of the anthology authors in the room to stand up and describe their stories, and damn they sound awesome.

Out in the Open

This was my own panel, so obviously I didn’t take any notes (also: my tablet was up in my room, charging). It was myself, Narrelle M. Harris, Ashleigh, and Liz Barr talking about fanfic, and about the changing relationship between fic fandom, content creators, and how open fic writers are about what they do and whether that’s changing. Liz opened the panel with a “we’re not here to talk about whether fic is ‘okay'” disclaimer, and it was definitely not a 101 panel (Alex later told me he spent most of it Googling what things like “tinhatters” meant), which was awesome.

Plus, I got free wine (shout-out to Su and Freya), so what could possibly be bad about that?

Deep Dive: “Body horror, and the aspects of the body in speculative fiction” and “Why do we need monsters?”

This was Claire Fitzpatrick speaking about body horror (especially the works of Clive Barker) and Naja Later on monsters, both of which are very much My Bag Baby. Sadly my tablet was still up in my room, so no notes, which I’m kinda bummed about.

This panel was Devin Jeyathurai, Lyss Wickramasinghe, Rachel Nightingale, Sam Hawke, and Freya Marske. I have to admit I’m the person who, actually yeah, does tend to dislike no-magic fantasy, so I felt like a bit of a ring-in (we came to support Lyss!), although there was some interesting discussion on what, exactly, counts as “no magic” (i.e. are the Discworld watch books “no magic”?) that challenged my thinking a little.

(… I still really like high-magic, sword-and-sorcery-style settings, though. So sue me.)

I’m pretty sure I heard Su say this was either her first Continuum and/or her first panel, in which case she did an awesome job, talking about portal fantasies and their (fraught) relationship with the immigrant experience. Gillian, meanwhile, spoke about how the constraints of language turn into our constraints of thought. Both excellent talks. 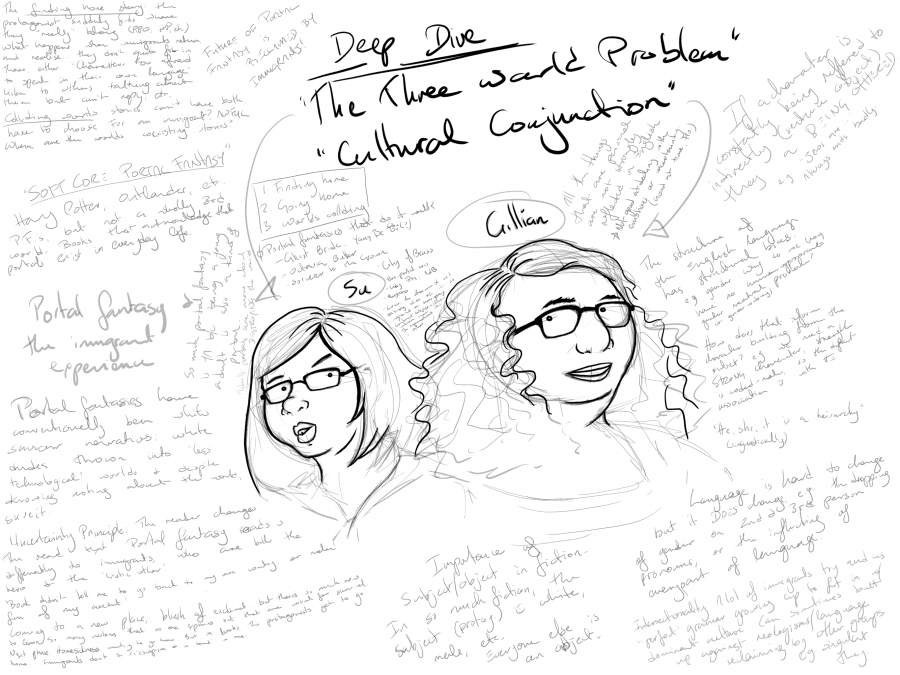 Aa-aa-and my last panel for the con, this time Rivqa talking about convict women in Tasmania (including the Flash Mob, the girl gang you never realized you were missing out on!) while Cat spoke about sci-fi’s Cassandra problem (i.e. it keeps predicting things and no-one listens because it’s “not serious literature”). This session also had an unusually good Q&A section, which was nice. 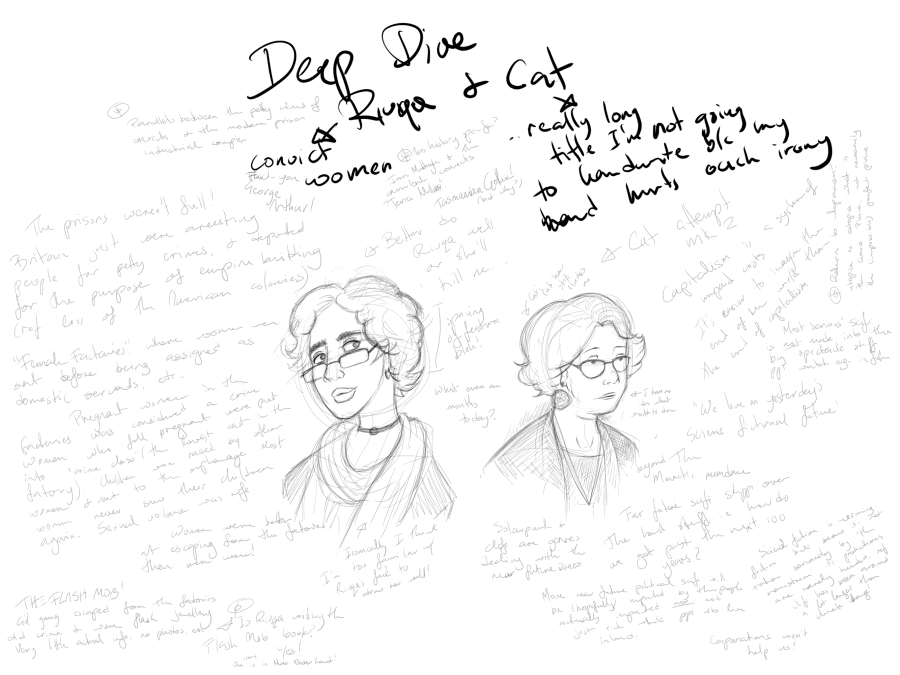 This is also me getting a bit more comfortable with doing these quick sketches, if only for the fact that I remember thinking I was doing really badly with them at the time (Cat and, in particular, Rivqa are much more familiar to me than some of the other panelists I was attempting to draw, which is actually more of a curse than it sounds), but now think these aren’t too bad. Some of it has to do with moving from a “crossed circle” base for faces to a box-model, which I think works a bit better to contain “eye drift”, but also me just getting a bit more attentive to things like the shape of faces and glasses.1 Anyway, apologies again to everyone I mangled with my attempts at sketching…

Barcon and other miscellanea

Other things of note: our DnD game (obviously), the obligatory multiple trips to Minotaur to buy books, and getting to meet Marlee Jane Ward (who’s lovely) and gush over how much I loved her short story. Oh, and I bought new boots. So, yanno. An all-around fun time.

See you next year!