… ye-ee-eah I missed last month. For Reasons. But we’re back!

And November (a Never Never Book Box month… and a sale at DnD Beyond):

Hey so you remember Last Time, on Books Read when I left The Origins of Totalitarianism feeling a bit, uh, shall we say uneasy about the implications of totalitarian ideologies when it came to liberal capitalism? Well, turns out someone else has had the same feeling, and there’s even a whole book on it!

Wolin wrote Democracy Incorporated in response to the Bush era and, quite frankly, it holds up scarily well. Often a dense read, it’s nonetheless eye-opening and even more relevant than when it was originally written. Definitely recommended for anyone side-eying the current world order…

So I knew, intellectually, that this book had been written by a melodramatic nineteen-year-old girl but… holy shit. I’d always thought that was kind of one of those half-joking-half-putting-down-women’s-work things. But, no. As someone who has, in fact, written fiction as a melodramatic nineteen-year-old girl, Frankenstein is, like. 1000% that. Almost to the point of having a kind of weird seeing-yourself-when-you’re-not-used-to-seeing-yourself resonance to the writing.

On the plus side: it’s significantly less sexist than 99% of all modern speculative fiction so… there’s that.

David Neiwert, Alt-America: The Rise of the Radical Right in the Age of Trump

Neiwert’s investigation into the American alt-right, tracing it back to the conspiracy theories and militia movements of the 20th century, through “movements” like Gamergate and finally into full-blown white nationalism and neo-Nazism.

If you’ve been following the American culture wars for the last few years, there’s probably nothing “new” here per se, but there’s a lot more detail than most things I’ve read before, which is interesting, if frequently difficult (Neiwert does not censor the words or ideologies of the people he’s discussing and… yikes).

That being said, I’m not… in love with Neiwert’s conclusion, which is basically I’m-not-saying-hug-a-Nazi-but-maybe-if-people-were-just-nicer style apologetics, seeming to stem from the fact Neiwert hails from a red-state area and has Hangups about it. And is also, yanno. Not directly a member of any group the alt-right is seeking to violently eradicate. So… there’s that. 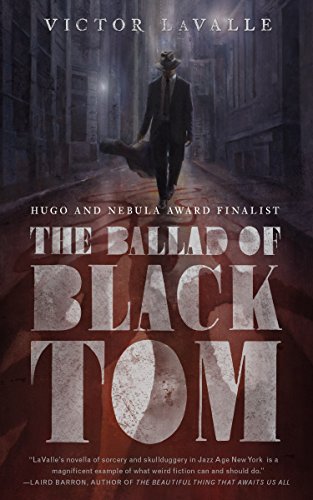 So, confession: because I’m a sucker for “urban squalor hiding OCCULT EVIL!!!” as a trope,1 “The Horror at Red Hook” is one of my favorite H.P. Lovecraft stories. Which is kind of… A Thing to admit, given it’s also one of the most blatantly racist of a blatant racist’s blatant racism2 which is, incidentally, why I think it “works”; to me, Lovecraft’s stuff always feel the most visceral when he’s writing about things that he personally found frightening which included “cold” and, unfortunately, “anyone not a white American man.” So… there’s that.

On the other hand, the One Thing I love more than Lovecraft are modern deconstructions thereof, meaning I was pretty excited about The Ballad of Black Tom when I first heard about it. It’s part of a run of similarly themed novellas Tor.com did, and unfortunately for me, I read The Dream-Quest of Vellitt Boe and A Song for Quiet first. I say “unfortunately” because I… did not love either of those stories. Dream-Quest I found extremely alienating, given its whole narrative premise that seemed to, rather than deconstruct, simply reinforce the idea that The Dreamlands are Not For You, Little Girl. Which, yanno. I can get from the source material.3 And A Song for Quiet just did not work for me on a prose-level; Khaw has that kind of poet-purple, mish-mashed-metaphor writing style that I know some people wet themselves for and that I can’t stand. So after those two I kinda… gave up.

Then Tor.com helpfully sent me an email saying Black Tom was its free ebook for October and I thought, what the hey.

So, in true “Red Hook” style, I read it primarily on a plane and… ugh. Yes, please! This is totally what I’m after in my Lovecraft deconstructions.

Black Tom is basically a retelling of “Red Hook” from the point-of-view of an African American man, the titular “Tom”, who gets mixed-up in the events of the original story. I remember pretty much zero of the specifics of “Red Hook”, so I can confidently say you don’t need to’ve read that to understand Black Tom, and in fact the novella ties the story into the Cthulhu mythos specifically in a way the original doesn’t. It is fundamentally a deconstruction of power and race, and who is or is seen as “monstrous” and why, and I think it works on that level while also just being a damn good read. Will definitely be checking out LaValle’s other work, as well as picking up a paper copy of Black Tom the next time I see it (or put in an order online).

Madeline Albright was, for those of you too young to remember, President Clinton’s Secretary of State back in the 90s, and the first woman to ever hold the role. She was born in Czechoslovakia in the late 1930s, into a diplomatic family, which meant her childhood was something of a whirlwind of exile and politics. These experiences, which she recounts some of in the book, have apparently left her with an enduring hatred of both Nazism and Communism, as well as what she herself describes as a “chauvinistic” love of her adopted homeland, i.e. the United States.

Albright is a strong believer in—and, given her former position, implementer of—of the Pax Americana doctrine, i.e. the notion that the US has some kind of “special role” as peacekeepers to the world.4 It’s undeniable that Albright walks her talk, and that she’s someone that’s left both a lasting legacy on the world and one that has, on balance, probably done more good than harm. On issues of history she knows what she’s talking about, and her anecdotes about the actual world dictators she’s met and dealt with are undeniably fascinating.

But, ultimately, Albright is still a product of a previous age. One gets the feeling, reading Fascism, that this is a book written by someone with the world’s best intentions, who nonetheless woke up one morning and realized everything she believed in is falling apart. Or, worse, is actively being rejected. Albright is an unapologetic civility centrist, who seems at times to have an almost “Great Game-esque” approach to international relations. Her childhood experiences also mean she has a vicious hatred of Communism—something I’m not entirely unsympathetic to, given my family’s own history—and, because of that, a kind of unthinking acceptance of market capitalism as its only “alternative”.

And it’s both capitalism and American imperialism that are the elephants in this book’s metaphorical room. In multiple chapters, Albright laments the resurgence of support for nationalist dictators in countries from Turkey to the Philippines to the United States, with an almost dewey-eyed bafflement at how anyone could possibly reject the kind of globalized neoliberal world order she spent her life working so hard to impose. Every now and again she seems to almost touch on what the people involved in those movements themselves describe as their underlying grievances—inequality brought by endless disaster capitalism, the suffering of the yoke of American hypocrisy—but always ultimately shies away from any kind of actual critical examination of the institutions she purports to love.

The net result is, while interesting as both a History 101 and a pseudo-memoir, extremely weak as a political science text, culminating in an almost laughable ending wherein Albright presents three “fictional” “horror” scenarios of a potential fascist rise in the US: one involving the election of a far-right ultra-nationalist who corrupts existing political structures and the media to undermine democratic institutions and foment racial hatred… and one involving a “left-wing fascist” who, um. Bans gendered bathrooms?

Did I mention Albright’s impetus for writing this book in the first place was apparently pearl-clutching over progressives using “fascist” as an insult? Which, you know what? Yeah, maybe we do throw that word around a bit too much, and yes it does have an actual polsci definition and not every authoritarian is ultimately fascistic. But, like… Albright herself both mentions this and then dismisses it, and proceeds to, for the rest of the book, herself conflate fascism, totalitarianism, and plain-old authoritarianism.6

And, so… here’s where I get back, totally unironically, to thinking about hbomberguy’s goddamn CTRL+ALT+DEL video again. You should watch it but, spoiler alert, the point is that sometimes a piece of media is less about what it purports to be about, and more about the relationship its creator has with the thing it’s purporting to be about. So it is with Albright and this book; if you go into it expecting a, ahem, Serious Lore Analysis on the causes of the rise of modern fascism you’ll be extremely disappointed. But go into it expecting to be presented with an inside look into the mindset of the late 90s American centrist political elite and it will, in fact, be very illuminating indeed.