This is it, folx and spolx. We are officially in our second year of “book read for” posts! Woohoo! I actually did a thing! And kept at it! Hi-fives all ’round.

On the other hand, I… bought way more books than I read this month (not to mention it was an NNBB month, see above) but… ssh. Let me have my moment.

So this is My First Patreon Reward! It’s a cute, short little story less about Jane Austen and more about Greek mythology… I guess? Honestly, I gotta admit I don’t know much about either subject. But this was still awesome, and if you too want to experience The Awesome you should check out Tansy’s Pateron. 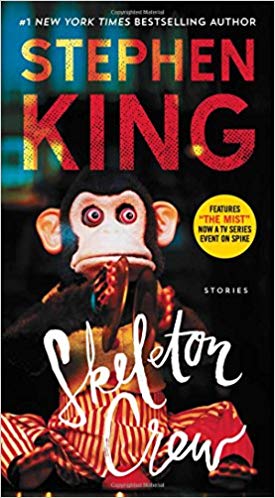 This is sadly not the cover I have… but it is a better one.

When I was a kid, I used to stare up in wonder at Dad’s shelves of sci-fi and fantasy paperbacks. I didn’t actually read many of them—which is fortunate, because the ones I did nearly put me off mainstream SFF entirely—but one of the things I did find/steal for myself was something called The Complete Book of Science Fiction and Fantasy Lists, which is sort of a… blog full of SFF listicles but from the days when people had to publish blogs in book format. I’m pretty sure dad bought it to find out who won the Hugos/Nebulas, but I liked it because it was full of random lists like “longest short story title” and “best opening line” and whatnot.

One of the lists, I can’t now remember which one, described the ending to a short story about space travel. Basically, in The Future, inter-planetary travel is achieved through jumpgate-esque technology during which all passengers must be asleep because Reasons. The story itself is about how some kid decides to go through the gates awake just to see, and how he comes out on the other side alive but mad and raving that the trip was, “Longer than you think, Dad! I saw! I saw! Long Jaunt! Longer than you think!”

This is a concept that’s stuck with me, as it turns out; I even steal it for a segment in the SPACE DEMONS book. So imagine my surprise to get about mid-way through Skeleton Crew, only to encounter a story called “The Jaunt” which—

Hey, wait a second. I know this one. Huh. Go figure.

Anyway, yeah. Skeleton Crew is one of the Big Books of Steven King Short Stories, which will either be your jam or it won’t. The novella The Mist is here, for which I’ve seen the film, and for whatever reason pretty much every story in this collection is told in an epistolary/narrator-framing-device format, sometimes with narrators recounting narrators recounting narrators, which can get… a bit much all together. A lot of these works were also VERY OBVIOUSLY written for skin/men’s mags, so there are… weirdly inappropriate sex-scenes in a quite a few, plus enough general “ugh” to make me finally realise where King gets his reputation as being a bit, like, sexist. Coming to King mostly through his novels, I’ve never particularly liked how he wrote women, but it didn’t really strike me as sexist, per se, and he certainly does a lot better than the majority of his field. Some of his short stories, though? Yikes. I guess no-one ever accused the man of not knowing how to write to market.

There are also a few sci-fi offerings here (“The Jaunt”, “Beachworld”) which… make it clear sci-fi isn’t King’s strong suit. I like both those stories—as mentioned above, “The Jaunt” was unintentionally formative for me, and “Beachworld” is kind of Solaris-but-not-shit—but King’s sci-fi is very definitely “Stephen King writing sci-fi” rather than “sci-fi written by Stephen King”.

Other highlights: “The Monkey” legitimately scared me, despite (or perhaps because of) having a nonsense premise. “Cain Rose Up” was… difficult to read in a modern context, given the number of mass shootings recently. “The Raft” would be Peak King but for the whole written-for-a-porn-mag-so-full-of-gross-sexism thing mentioned above. “Survivor Type” is another one of those stories that gives the weird cultural déjà vu that indicates I’ve seen it referenced elsewhere enough to know it without having actually read it before. The Milkman stories feel like they’re part of something bigger. And “The Ballad of the Flexible Bullet” is a shaggy dog story that, given King’s history with substance abuse, feels more like a cry for help than anything else.

All-in-all, not my favourite King collection, but still some worthwhile reads.

This is a setting book for D&D 5e, similar to the Sword Coat Adventurer’s Guide but for Eberron, a setting I admit I don’t have much experience with but that HOLY SHIT SOUNDS AMAZING MAGITEK PEW PEW SKY PIRATES AWW YISS!1

There are some cool things here, like the character options and a neat magic items crafting mechanic which, if you’re like me and prefer your fantasy high-magic to low-, will be immediately stealing for your own Faerûnian campaign. But mostly this book is about the fluff, which can be a little frustrating since it’s of the “broad, not deep” school.

A good start but… I need more, damnit!

This is another Patreon reward and a short story based in RoAnna’s Chameleon Moon ‘verse which, ahem. I confess I haven’t read. But I totally will! Particularly after this…