Back to our Regularly Scheduled Monthly Recaps (hopefully)…

W&G is totally comfort read for me because, well. Queer Lovecraft with (hints of) monsterfucking? Hahah of course it’s a comfort read.

Maelstrom develops more of the lore of the W&G universe, specifically the town of Widdershins itself and its relationship with the titular Whyborne. A tentacle monster appears. Griffin ogles it, as would we all. I mean, honestly this is the seventh book in this series, so if you haven’t already gotten onto this but the description in the first paragraph appeals, then… go read it? Sweet. 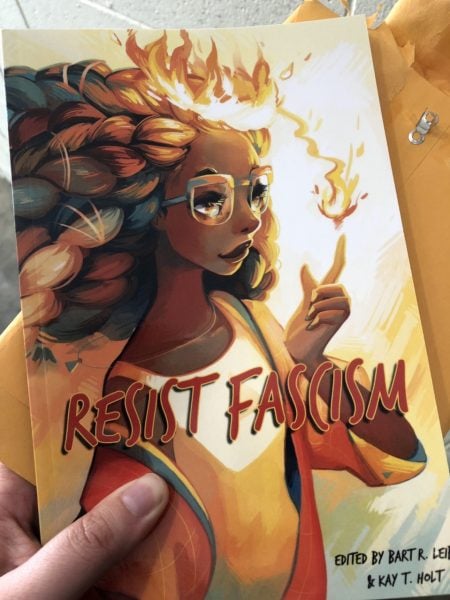 Two things about this anthology. Firstly, the lead story in it is by my fellow consnarker, Rivqa, and I had the pleasure of beta reading it for her, so there’s that disclaimer out of the way. Secondly, holy shit is that cover not awesome?

The absolute stand-out story in this anthology1 is R.K. Kalaw’s “3.4 oz”. To say it’s about “going through TSA” would be both accurate and an understatement, so basically just buy the anthology right now immediately to read that and stop regretting all your life choices. It’s that good.

The other stories… were a bit of a mixed bag, for me. Fatphobia is… I won’t exactly say “rife”, but for a work that’s supposedly  intersectional the amount of fatphobia I actually want to see is “zero”, and the fact this anthology has a non-zero quantity, across multiple stories, was… disappointing.2

My other nitpick is that, well. Fascism, like. Means something. Heaven forfend I agree with Madeline Albright’s mediocre-ass book, but… fascism has a meaning. Like, a specific one. It doesn’t just mean “people doing things that offend my American sensibilities.” And I get that the actual title of Resisting Fascism is using the term more in its pithy colloquial sense rather than its actual literal definition sense, but it was still kinda disappointing to me how many of these stories boiled down to a variant on, “Super cool rebel individually FIGHTS THE MAN!!!! FOR FREEEEEEEDDDDOOOOMMMMM!!!!!!” which… uu-uu-uh. Yeah. About that.

Still. As mentioned above, it’s definitely worth picking this up for “3.4 oz” and the cover art, if nothing else.

For those of you who recall, I really enjoyed the first book, though thought it had some… stylistic issues that could’ve used a bit more of a heavy hand in the editorial department. The good news with It Devours! is Fink and Cranor seem to’ve smoothed out whatever they were stumbling over before, and the prose no longer gets in the way of the story. Everything that was good about the first book is back with a vengeance—the existential mystery! the characters! the regularly scheduled Night Vale weirdness—but ultimately It Devours! didn’t quite work for me in the way its predecessor did. Part of it was some of the lore elements, which left me… confused (maybe I’m stumbling over fanon but I… recall the desert otherworld and Smiling God subplots very differently than how they’re presented here), but mostly it’s because this is, ultimately, a book about science versus religion which, as a raging antitheist, is just not a theme I find all that interesting, particularly not in the wishy-washy “but maybe both sides are equally right and wrong!” way that’s presented here. YMMV, but… eh.

So this is cheating a bit: I haven’t technically read the entirety of this webnovel, since the entirety of it hasn’t been translated yet (as far as I’m aware). But I have read all of the bits that have been, so… this is going here.

Like I think 99.99% of Guardian‘s English-speaking fandom, I came to it via the webdrama, after all the Cool Kids™ started talking about it on Mastodon. I pretty much binge-watched all forty hours of that, which is unusual for me, and despite the fact the series has some (ahem) Obvious Flaws I immensely enjoyed it. I told myself I wasn’t going to immediately then go seek out the novel, which turned out to be a big ol’ lie, and I tore through all seventy-five of the currently translated chapters in a few days.

First things first, for those who haven’t yet been infected by this fandom: Guardian is a Chinese urban fantasy BL series originally written anonymously by priest, since apparently writing both modern urban fantasy and BL novels is kinda-sorta-they-actually-arrest-people-for-it levels of illegal in China. Guardian is basically a cross between Torchwood, Supernatural, and BBC’s Merlin, and is about a (sort of) Secret Police Agency, the Special Investigations Department/Unit, who’re tasked with protecting the citizens of an, a) imaginary Chinese (the novel), or b) Vaguely Defined Secondary Fantasy World (the drama) city from either, a) escapees from Hell (the novel), or b) rouge members of a super-powered alien race from a suspiciously-Hell-like-but-totally-not-actually-Hell-we-swear underground colony (the drama). To do so, the SID is populated by a Lovable Cast of Misfit Rogues, including an immortal shape-shifting cat, a “fake monk” (novel)/mad scientist (drama), a shape-shifting snake lady, two ghosts (novel)/”energy bodies” (drama), a cannibal necromancer zombie (novel)/puppet-kung-fu-wielding alien (drama), and The New Kid. This is all lead by the current “holder of the Guardian Order”/”Lord Guardian”, Chief Zhao Yunlan (romantic lead #1), who works with a Mysterious Ominous Figure from Hell/the alien colony called the Ghost Slayer/Black Cloaked Envoy, all while crushing/”bromancing” on Sexy University Professor Shen Wei (romantic lead #2). Also, there’s reincarnation/time travel.

The differences between the drama and the webnovel, incidentally, relate to the thing mentioned above about post-revolution urban fantasy (and depictions of homosexuality) apparently being a censored no-no in China. priest, writing anonymously on the internet, was less invested in evading the censors than the production company involved in the drama, hence all the novel’s supernatural elements being papered over with a thin veneer of comic-book-level science fantasy, and the romance being played as what would get called “queerbaiting” in the West but really doesn’t deserve that title in a context where the actors could literally be arrested for the level of intimacy already portrayed, let alone more. So there’s that.

That’s the backstory. With regards to the novel, it’s very, very worth remembering that Guardian has no “official” English translation, and the versions that do exist are all essentially amateur bootlegs made by fans. Because of this, there are certain, um, issues I had with the novel that are difficult to assess whether they’re due to the source text or not. Specifically, all the characters in it are mean. Like, really, really actively cruel to to each other, especially in roughly the first half. One of the things I loved most about the webdrama was the sense of found family in the SID, and that’s… pretty much entirely absent in the novel, in a way I found disappointing.

I was also not… entirely sold on the primary romance. This is probably heresy in Guardian fandom but, I confess; in the show I shipped the secondary pairing (of puppet kung fu dude and The New Kid) way harder than the WeiLan, and the novel has not changed that opinion. Actually, kind of the opposite; I enjoyed Shen and Zhao’s interactions in the drama (and it doesn’t hurt the actors are both Ridiculously Attractive and have Extreme Chemistry), but the novel leans into a lot of what I assume are top/bottom BL dynamics that I just… don’t find appealing. This coupled with Zhao coming across as significantly meaner than his show counterpart means I’m a bit “… eeh” overall on the way the pairing actually plays out, despite adoring pretty much every other trope about it.3

All that being said, the world in Guardian (novel) is… absolutely 100% My Bag, Baby. I didn’t mind the Dixing stuff from the drama4 but I am huge sucker for a Chinese-style bureaucratic Hell and Journey to the West-style demonic enlightenment5 tropes, of which the novel has both in spades. Actually, the translation is only just getting into the meaty portion of the myth-arc stuff, and am I looking forward to future chapters? Oh yes, yes I am.

Tl;dr a flawed-but-addictive series y’all should totally go check out in both incarnations, assuming you haven’t already. 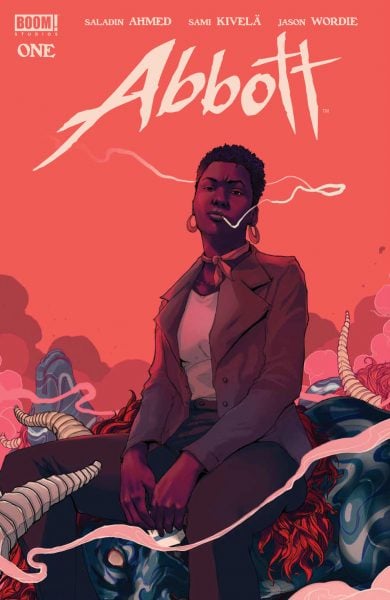 This comic about a bisexual African American reporter lady fighting RACISM and MONSTERS in 1970s Detroit is… actually it’s pretty much everything that bugs me about the current trend of “woke media” coming out of the US.

Don’t get me wrong; superficially, there’s lots to like about Abbott, from the one-sentence pitch to a few great scenes of body horror. It’s just everything else that rubs me the wrong way. Or, more specifically, how Abbott seems to lean hard into that Woke Media 101 trope of, “but what if… but reversed?”

And maybe it’s just me, but a story where “dark” is totally unironically equated with “evil” and the Monstrous Other, and “light” with good and humanity, just… doesn’t feel that “progressive” just because the bad guy is an old white dude and the Thinly Veiled Religious Analogy is a black woman. Particularly when you start considering just how disposable this title seems to consider black male bodies (all the on-screen murder and degradation is reserved for young black men). And, yeah. I get that it’s trying to make a comment on6 the way black masculinity is made monstrous—is dehumanized and commodified and exploited—by white supremacy. Which: fine. Except Abbott… never actually manages to coherently articulate that. Actually, I sort of feel like I’m reaching to ascribe even that level of intentionality to it. The main villain, as far as I recall, really has no explanation for why he’s targeting African American men. Other characters allude to black men being “easy targets” for victimization because their murders won’t be investigated by the racist and corrupt police and media, but this throughline is never actually confirmed by Generic Whiteguy Villain Man’s monologuing, and it’s not even clear he is specifically targeting any one ethnic group;7 all the murders we specifically see are of black men, but the narrative is clear that GWVM has killed at least two others, and their ethnicities are indeterminate because of Spoiler Reasons.8

Moreover, the black men mutilated and made monstrous by GWVM’s Evil White Supremacy Scheme are not portrayed as being redeemable in any way other than death at the hands of Abbott herself. Which… whether you look at that in the “black monstrousness is only redeemable by martyrdom to the bright light of whiteness” way or “black monstrousness is only redeemable by the emotional labour of black women” way, is ultimately kinda, like. Yikes. And, like, to be clear: I don’t think that was the intentional result of overthinking this comic. But that’s kinda entirely the problem; Abbott‘s superficial wokeness (“Black! Bisexual! Woman! Fights racism! And monsters!”) only serves to kind of highlight the fact that… uh. Actually, it… kind of seems to’ve unironically recreated some extremely freakin’ racist tropes of its own.9 Oops.