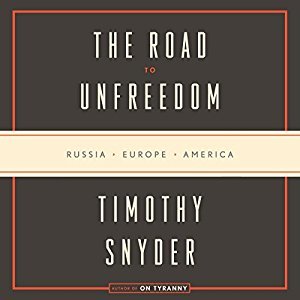 This was a dense-but-fascinating book I really should’ve written about last month, because I do remember I had Many Thoughts on it at the time which of course now I’ve pretty much wholly forgotten.

Snyder’s thesis, essentially, is that there are two major types of political dysfunction endemic in the modern era. The first is what he calls the “politics of inevitability” and is more commonly known by its Fukuyama-coined moniker of The End of History.1 Inevitability Politics, in a nutshell, posits that the current system (whatever it happens to be) is the inevitable end point and evolution of political organization; all future political systems will be slight refinements on the current one, but will not be radically different, since all “radically different” political structures have already been tried and have subsequently failed. As suggested by the Fukuyama namedrop, the current Western system of liberal democratic capitalism is the main player in the Inevitability Politics space; any imperfections in the system must be worked out according to the rules of the system, i.e. “individual choice” and “the Market”, and all resistors will inevitably be assimilated over time (the future is capitalist!).

Opposed to Inevitability Politics is what Snyder calls “the politics of eternity”. Eternity Politics is the politics of the Nazis and of the Soviets and of Christian Dominionists. It essentially posits that history is eternally in a Manichean cycle of “good” (the “us”) being constantly being threatened by an external “evil” (the “them”). Eternity Politics, when it manifests, usually portrays itself as arriving at a moment of “peak bad”, where the threat of The Them has become so intolerable that there’s no option but for The Us to rise up in violent rebellion, in order to “reclaim” a mythical golden age that existed prior to the coming of The Them.2

(It’s also worth noting at this point that Snyder considered both Inevitability and Eternity Politics to be the tools of totalitarian states, ref. Wolin and Arendt).

The bulk of this book, then, is dedicated to the notion that modern Russia has lapsed into a vicious sort of Eternity Politics under Putin, and exactly how and why this has played out. Specifically, Snyder believes Putin is an aggressively hostile nationalist fascist, but one who is extremely conscious of Russia’s weakness versus the rest of the world. Russia’s intentional strategy then, according to Snyder, is to consciously attempt to undermine the power and institutions of West, essentially to fragment it and bring the individual pieces down to Russia’s level (if you can’t make yourself stronger, make everyone else weaker). It’s a strategy that has, quite frankly, been successful; Snyder documents various incidents, starting in Eastern Europe, of Russia executing this strategy, up to and including Brexit and the election of Trump.

As mentioned, this is a fascinating and, quite frankly, terrifying book. That being said, it does reflect the author’s obvious biases in certain areas and there’s probably an argument to be made around Snyder taking an over-hyped view of Putin as a kind of master global manipulator. That aside, I do like his articulation of Inevitability and Eternity Politics, and if the ultimate takeaway here is nothing more than “Putin’s Russia is hostile and the West underestimates it” then… I think that’s probably worthwhile.

Alan I. Abramowitz, The Great Alignment: Race, Party Transformation, and the Rise of Donald Trump

Extremely dense statistical analysis with the tl;dr that Trump voters are racist af. 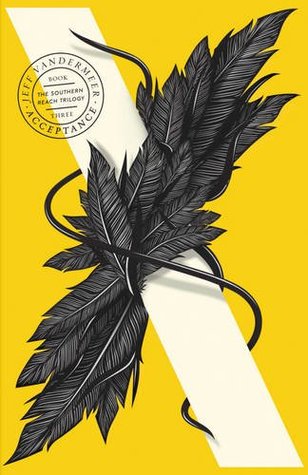 … still the best covers, though.

So I remember saying in my review for the second book in this series, Authority, that I put off reading it because I’d loved the first one so much, I was worried I’d be disappointed by the second. As it turned out, that didn’t happen (I loved Authority)… then. It happened now.

So, yeah. That’s the thing; I did not love Acceptance. Part of it was utterly loathing what VanderMeer did with John/Control; I loved Control in the first 80% or so of Authority, right up until his weird personality transplant with regards to Ghost Bird in the last chunk. Unfortunately, Acceptance Control was that Control, but worse, to the point where he’s gone from “over-his-head-but-likable” and done a nosedive straight into “irritatingly incompetent”. It doesn’t help that I also… deeply dislike Ghost Bird, who I find too wannabe “mysterious”3 which, again, is irritating given her relationship to my other favorite series narrator, i.e. the Biologist from the first book.

That sort of “wo-oo-oo spooky hands myste-ee-ee-erious!” vibe was, I think, what annoyed me about the book in general; Annihilation and Authority set up such an interesting world and mystery around Area X and Central that Acceptance just… doesn’t deliver on. I’m not the kind of person who minds narratives being ambiguous,4 but there’s a difference I think between “intentionally ambiguous” and “ass-pulling”. And Acceptance felt too much like the latter. It’s not just that nothing is resolved so much as it’s you can pretty much feel Vandermeer’s worldbuilding becoming thinner and more brittle with every page.5 Which… disappointing, basically.

On the plus side, I did like the segments of the book focusing on Saul, the lighthouse keeper, and speaking of the Biologist, she got an absolutely awesome cameo. Overall, however… meh.