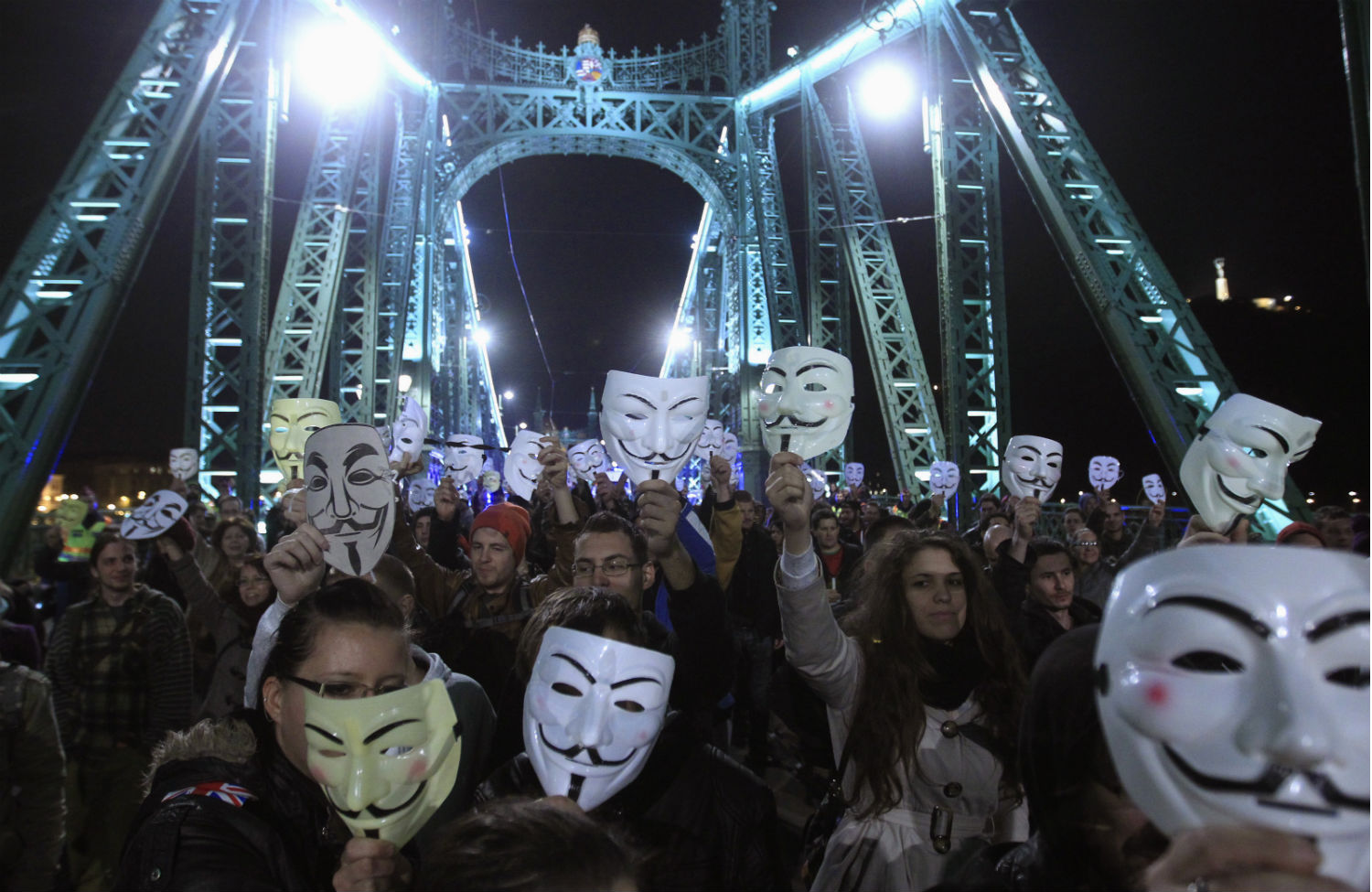 The Truth About Anonymous’s Activism

The celebrated hackers represent the worst of techno-utopianism.

A critical look behind the grinning, PR mask.

Essentially, Anonymous is a 4chan hate group–remember when they used to “raid” online chat games to spam them with racial slurs?–that got popular when it decided to take on everyone’s favourite buttmonkey, Scientology. Fuelled by positive press attention and the delusional power fantasies of a character from a somewhat mediocre comic book,1 Anonymous became the go-to mask for anyone with a grudge and a vigilante complex.

Adrian Chen’s Nation article is mostly a take-down of Anonymous apologist Gabriella Coleman’s book, Hacker, Hoaxer, Whistleblower, Spy: The Many Faces of Anonymous. It’s pretty obvious Chen has no time at all for Coleman’s declarations of Anonymous as anything particularly special or revolutionary; Chen is quick to note (with visuals) Anonymous’ racist roots, and its continuing appropriation of Black causes, such as attempting to co-opt Black activist Feminista Jones’ Ferguson protests. Chen also points out the Anonymous mantra of “lulz” is less of the trickster-speaking-truth-to-power sense the group nowadays likes to project, and instead has its roots very much in the doxxing and harassment of the vulnerable.

Coleman repeatedly interprets Anonymous’s most bewildering and troubling actions with ham-fisted analogies to legendary tricksters like Loki and Eshu, placing Anons in the realm of myth and outside responsibility.

And, well. I admit I don’t know very much about Eshu, but comparisons like this are why I hate facile 19th century pop-culture comparative mythology bullshit,2 because Loki is very much not a “trickster” who is “outside responsibility”; in the sagas, both he and his actions are depicted as evil and malicious, and he answers for them every single time. Loki gets his mouth sewn shut, his balls ripped off, and his family murdered and enslaved.3 By the end of things, he’s imprisoned, tortured, and destined for (eventual) death. In other words, the Vikings were not putting up with Loki’s “lulzy” bullshit, and the character definitely does not come from the same tradition as, say, Coyote or Br’er Rabbit.4

But that’s kind of a bit of an aside, and my own personal bugbear. Getting back to the point, one of the things I think is interesting in Chen’s article, which Coleman touches on in her book, is the notion that participation in Anonymous involves a severe dehumanisation of the self. Chen writes:

Anonymous’s core virtue, according to Coleman, is its fostering of a subversive and potentially revolutionary form of consciousness in its members. Joining Anonymous requires subsuming your identity into the collective; anyone can claim the Anonymous name, after which their actions become Anonymous’s.

This is dehumanisation. Notably, this is what the army does in order to prepare its soldiers for, yanno. Killing people. It’s the breakdown of personal morality of the “I was just following orders” variety, and it is not a good thing. Chen doesn’t, I think, pick this thread up as hard as he possibly could. Nonetheless, he’s still scathing:

[L]ike a Silicon Valley buzzword, “lulz” obscures more than it reveals, glossing troubling details with a rebel-chic sheen. The lulz originally did not speak to the pleasure of some abstract transgression, but the specific, cruel pleasure of a bully tormenting a helpless victim. Whitney Phillips, another scholar of Internet trolls, spent thousands of hours observing 4chan trolls and found that their victims had something in common. She found that “the vast majority of lulz are derived from targeting people of color (especially African-American), women, gay men and lesbians.” Many early Anonymous “raids” were nothing more than the distributed cyberstalking of young women until they fled the Internet. The trolls, meanwhile, were overwhelmingly white and male, between the ages of 18 and 30 […]  In its early days, Anonymous was a gang of white men who systematically terrorized minorities and women, with the often explicitly stated goal of driving them from an Internet the men had once totally dominated.

Chen points out that even today’s “lighter, softer” Anonymous is still predominantly male, with female Anonymous members facing disproportionate harassment. Coleman, of course, makes a bunch of mealy-mouthed apologetics for this, asking, apparently with a straight face, “Is this sexism or just trolling?” As if this question is somehow meaningful. (Spoiler alert: it’s both.)

Chen goes on to question pretty much every single one of Anonymous’ supposed “victories”, making astute observations such as the continuing existence of the Church of Scientology, standing resolute in the face of such Anonaction as Operation Slickpubes, wherein a dude ran into a Scientology church “naked, smeared with Vaseline and pubic hair”, and was promptly convicted of a hate crime for his efforts. Chen cites activists from causes picked up by Anonymous, whose reaction to the internet freakshow seems to vary from “indifference” to “outright hostility”. Interestingly, he also traces Anonymous’ history back to certain strains of hippie counterculture of the 1960s; a link which is, I think, not well-known, but obvious to anyone who’s studied the history of both the fall of the New Left and the rise of geek/hacker culture:5

[Anonymous] is the most radical advocate of a widespread conflation of technological prowess with political wisdom. Anonymous is Silicon Valley’s unwitting shock troops, a live demo of the Internet’s power to transform our world. When Anons call for revolution, they’re calling for a better world. But the shallowness of their politics and their uncritical embrace of technology means this energy is easily channeled into Silicon Valley’s parody of revolution: a techno-liberation from the doldrums of day jobs with health insurance and steady benefits, in favor of the radical freedom and flexibility to pilot an Uber under contract.

Basically, Chen makes the argument that Anonymous is sound and fury, signifying nothing. They make for good photo ops in their masks, but if anything they perpetuate a kind of anti-activism, with the actual outcomes of their “protests” being, at best, a mild rise in public awareness, and at worst, massive fuckups including doxxings, leaks of personal data, and false accusations against innocent civilians. The payoff from Anonymous’ work, then, seems grossly out of proportion to its cost.

In other words, if you want to feel like a hero at no risk to yourself–and have no actual interest in the actual social outcomes of your work–then maybe Anonymous is the right cause for you.