Okay, so, you remember our last post on Alis’ Rules of Writing? In it, I said Rule #8, which was “No one actually gives a shit about your worldbuilding”, and then some more explanation to that effect.

I’d be very interested in your worldbuilding essay. I’ve always thought worldbuilding is my weakest point, which has been borne out by agent/publisher reactions. You know, if you were going to write it anyway.

And because Tumblr is so terrible for conversations, I figured I’d answer the question here.

First of all, obligatory disclaimer: I am one author and this is my One Author Opinion. It’s not some kind of Magic Immutable Writing Gospel by which thou musteth abideth. Hell, I don’t even necessarily abide by it.

But, with that being said…

I think it’s really easy to overcook worldbuilding, because firstly, I think most of us find it fun. (If we didn’t, we probably wouldn’t be specfic authors in the first place!) But secondly, I think it’s because worldbuilding is what we tend to point to when we feel the need to justify what, exactly, makes something “specfic” as opposed to… something that looks like specfic but “isn’t”, quote-unquote. So think about those kinda-SFF-kinda-literary works people like to argue about, like The Magicians or The Bone Clocks. Is The Martian sci-fi? Is The Book of Strange New Things? Is Outlander? Is The Satanic Verses? Why or why-not, discuss.

When I hear specfic fans make arguments against works like these not “counting” as specfic, they almost always cite something about the worldbuilding. Like, Outlander isn’t “proper” fantasy because it just has the one(ish) instance of time travel, and it’s not “proper” sci-fi because the physics behind said time travel isn’t explained at massive length. The Martian‘s not “proper” sci-fi because its tech to too near-future. The Satanic Verses isn’t “proper” fantasy because it’s written by a brown guy.1 And, like, always inherent in these arguments is this idea that if these works just pushed a teeny tiny bit harder, then they could cross some kind of Minimum Worldbuilding Threshold in order to be counted as Proper Specfic. Like if Outlander had TARDIS. Or if The Martian involved actual Martians. Or if Salman Rushdie was Sam Rutherford. Or… whatever, IDK. I don’t make these arguments, I just hear them.

So, yeah. Tl;dr, sometimes I think the Specfic Community has drawn this kind of self-justifying boundary made of Worldbuilding around itself which is uses to vet who is and is not Allowed To Be Counted. It’s kind of the SFF equivalent of the you’re-not-a-real-gamer-you-only-play-80-hours-of-The-Sims-a-week “argument”. It’s also about as compelling, if you really think about it, but I think a lot of people, particularly unpublished specfic authors, don’t really think about it; they just kind of take it as gospel that to be a specfic author, you have to start from some incredibly complex secondary world (or modified this world, in the case of horror/urban fantasy), in order to make the cut.

A lot of How To Specfic 101 type classes/guides reinforce this. Like, how many of you have been to or read one of these, and see something like this diagram: 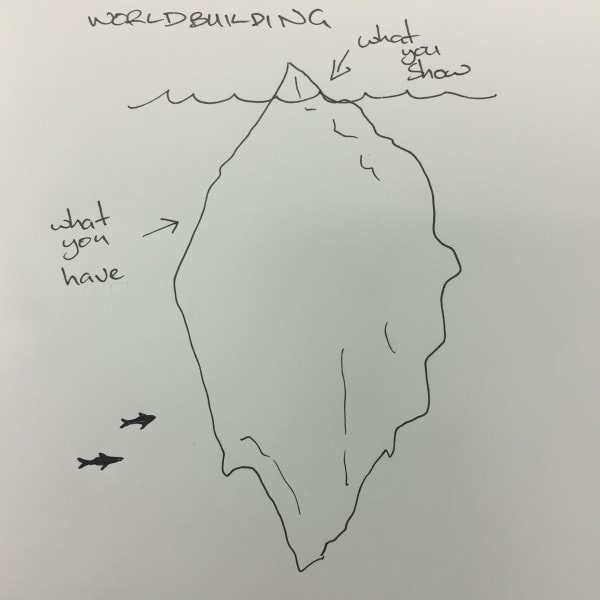 How you’re normally told to do it. I should’ve drawn more water on this. Oh well.

Usually followed by hours of techniques on how to design alien worlds, species, ecosystems, magic, languages… whatever.

Don’t get me wrong, this stuff is useful–it’s also fun, which don’t underestimate–but, like I said, I think it’s really overemphasised. I mean, at the end of the day, what have you just done? You’ve made a iceberg, a giant static block of cold crap floating in the middle of nowhere. Which, okay. Cool. And, like, there’s some sharks or penguins or something in there, so maybe that’s kinda interesting. But… eh. No matter how detailed you’ve drawn you ice, or what the chemical composition of the sea, all you’ve got at the end of the day is an iceberg. 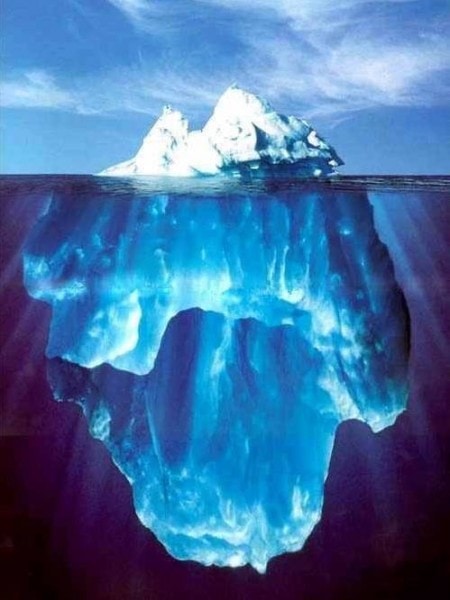 See, this is the problem. No matter how high the resolution, a pretty photo of an iceberg is still just a pretty photo. It’s hard to get really invested in it which, to bring us back around to our analogy, can be seen by the massive number of people who don’t say things like, “Oh, yeah. I really hate Star Wars and I’ve never seen any of the films… but man the ecology of Tython is just so interesting.” I mean, I say this as someone who owns The Wildlife of Star Wars

, so I assume this doesn’t never happen. But I’ve also seen all the Star Wars films, played a bunch of the videogames, read a bunch of the books, and married a guy who’s like a walking Wookiepedia, so… yanno. There’s that. More relevantly then, perhaps, I own The Dragonlover’s Guide to Pern

despite not actually having ever read a Pern book. True story. I tried when I was a kid and I just couldn’t get into them.2 But I still bought the book because, yanno. Fuckin’ dragons man, woo!

Anyway, point being: readers really tend not to come to the yard for your worldbuilding alone, despite how much emphasis gets put on it.

So what do? Well, let’s redraw our iceberg diagram, but do it The Alis Franklin Way: 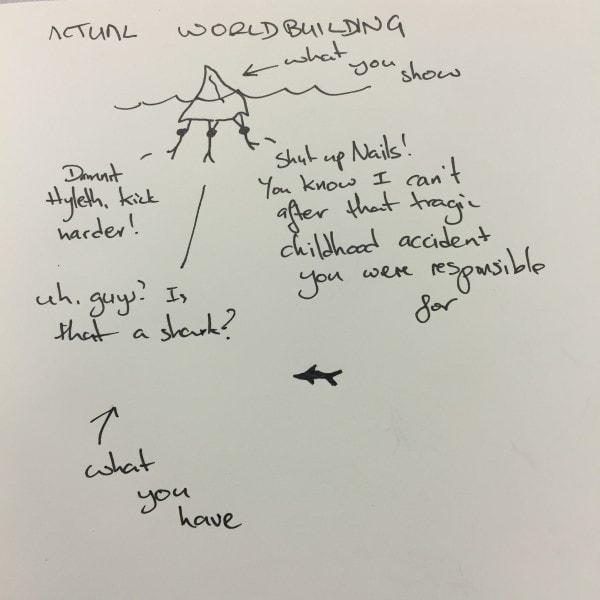 This is our new worldbuilding. Now write me a story about this one. Easier, isn’t it?

Why? Because now we’re mixing it up. Yeah, we have a little dash of worldbuilding, but it’s worldbuilding that’s propped up by three characters, some kind of past angst, and some current antagonist and threat. The reason I put all that below the waterline, incidentally, is because it’s amazing how much worldbuilding you can get away with not doing, assuming readers are invested enough in everything else (i.e. character and story). I mean, why doesn’t everyone in Westeros go extinct every time they get one of those mini-ice age winters of theirs? Spoiler alert: no one gives a shit! Or rather, people do, but only in the sense that they’ll spend thousands of words making up excuses for it, when really the only actual answer is, “Because there wouldn’t be any fucking story if everyone was dead.”

Suspension of disbelief, this one’s called. Readers are willing to put up with a lot so long as they’re having fun.

Think about Discworld; Terry Pratchett’s my go-to guy on this one, because he was the master of sleight-of-hand pseudo-worldbuilding. There is no way someone reading The Color of Magic back in 1983 could possibly have guessed that thirty years later the penultimate book in the Discworld series was going to be about the politics of the introduction of the steam train, least of all Pratchett himself. I will eat my Apple Watch before I believe he’d planned that at the outset. And yet, despite everything, the Discworld series has some of the best and most interesting worldbuilding of any fantasy series in recent memory. Why?

It’s because Pratchett’s worldbuilding almost always serves, firstly, his characters, and secondly, the story he’s trying to tell with said characters. Which is also, incidentally, why the series gets better as it goes on; he starts doing this more explicitly than in the first couple of books, which are more worldbuilding-serving-as-fantasy-trope-deconstruction (which is also why we never see things like the Wyrmberg again).

I don’t necessarily suggest trying to emulate Pratchett; his worldbuilding is a great destination but a bit of an ad hoc journey. If you’re as skilled an author as he was, feel free to try and get away with copying that strategy but, yanno. Good luck with it. For the rest of us mere mortals (irony intended), the main take-home here isn’t that you should have no iceberg below the surface of your water, so much as it is to remember that there’s a conversion rate between tonnes of ice and the flesh(ed outedness) of the characters you have holding it up. The stronger your characters, the less ice you need to keep up the illusion of the iceberg or… something. I feel this analogy may’ve gotten a bit lost on me, but. Whatever.

Point being: worldbuilding in and-of-itself is way, way overemphasised. Sketch the outline of what you need, then let your characters–and the story they’re telling–build the rest in for you as you go.