From the article “Why I’ve all but given up on Windows“:

But now, other than for test systems and virtual machines, I carry out my day-to-day work on a variety of OS X, iOS and Android systems. I barely giving my Windows PC systems a second glance. My primary work system is a MacBook Pro, and in the ten months I’ve had it it’s flawlessly done everything I’ve asked of it, from run Microsoft Word to render 4K video. I’ve lost count of the number of notebooks I’ve owned over the years, but this MacBook Pro is, by far, the most reliable system I’ve owned, and I put part of that down to the fact that it doesn’t run Windows.

Sure, I’ve downloaded and installed Windows 8.1 onto a number of systems for testing, and I’ve put an awful lot of hours into getting to know this latest release of Windows, but I see nothing in this new version that excites me sufficiently to tempt me back into the Microsoft ecosystem. If anything, the effect has been the exact opposite, confirming my belief that parting ways with Windows was the right thing to do.

I use Windows for exactly two things: my office job, and gaming (given I’m not a console girl). Oh, and also on those very rare occasions when I pick up PhotoShop and do some art. For art and gaming, Windows is fine, largely because the OS is mostly “invisible” to the task. I have two monitors attached to my home PC, and the second one is mostly used to run a VM session of Ubuntu for browsing the internet and watching YouTube whilst gaming/arting in my main monitor. About the only other application I run with any other frequency is iTunes.

For everything else–email, writing, project management-y stuff, programming/coding, et cetera, et cetera–I have a combination of my laptop, phone, and tablet, all of which are Apple products heavily leveraging various (and mostly Google-run) SaaS/”Cloud” offerings. END_OF_DOCUMENT_TOKEN_TO_BE_REPLACED 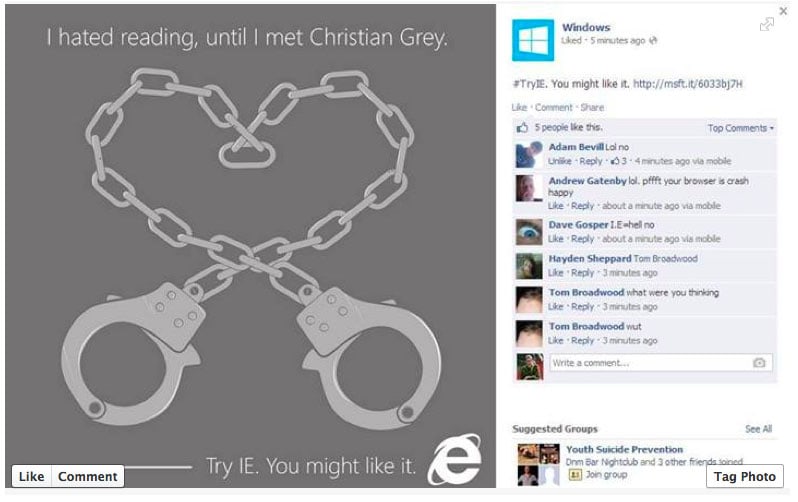 How’s that ad strategy working out for you?

(via the aptly titled “Why Are So Many Social Media Managers Dipshits?”)