I love open APIs that allow for things like this.

This whole experience1 was wild, and someone way more articulate than me I’m sure could make hay writing some kind of retrospective about:

… and probably many, many more!

The beauty of getting someone else to do your infrastructure for you: last night while I was sleeping, fandom.ink was updated to Mastodon v2.7. This release has a bunch of new features, the main one being the directory (pictured above).

To say the directory was an, ahem, controversial feature would be butting it mildly, so the end result is opt-in via a setting on your profile.

Opting in to the directory.

It’ll be interesting to see how this feature evolves, and in particular how it impacts the use of things like content tagging. But for now… there it is!

On the other hand, the main thing I’m jazzed for in 2.7 are the new moderation features, specifically the ability to send people narky emails from the UI when they do naughty things.1 Which, of course, no one is doing, because pretty much everyone on the instance is too nice. But, yanno. One day!2

So I’ve been trying to get the ActivityPub WordPress plugin working at alis.me for a while, to no avail. I’d kind of narrowed it down to it tripping over some kind of nginx config error, but couldn’t for the life of me figure out what, exactly.

Then, today, I actually (ahem) bothered to check the site error logs. And, er. The plugin issues listing on Github. Which… helpful, turns out.

So apparently the default WordPress nginx config file I’ve been using prohibits access to period-prefixed files. Unfortunately, ActivityPub’s Webfinger endpoint thingie is a /.well-known, so it was getting 403’d. Knowing that, plus actually bothering to read this issue, and I added the following just above the existing dot-prefix deny directive: 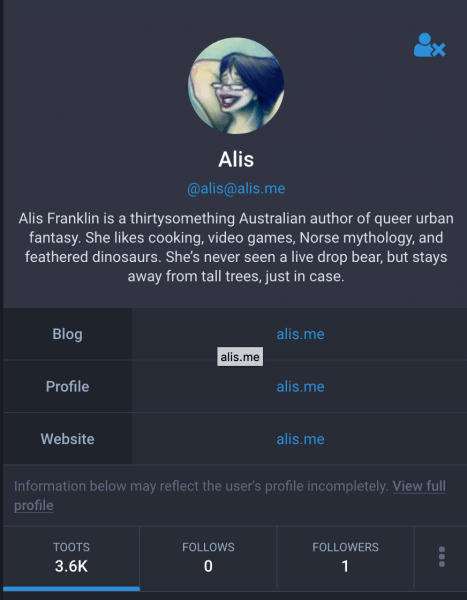 So, yeah. Now if you need yet another channel for me to spam you on, you can find it at @alis@alis.me on the Fediverse!

We’re months removed from the Cambridge Analytica scandal and the public outrage of #DeleteFacebook, and new information continues to surface about Facebook’s sloppy handling of data an…

Interesting interview with Eugen Rochko, a.k.a. Gargron the creator of Mastodon, on the growing resurgence of the decentralised, federated web.

I think it’s telling about the alienating effect of corporate social media that the most common new user interaction I see on Mastodon is:

USER 1:
omg I didn’t actually expect to get nice people helping out lol

hi! i’m interested in joining fandom-ink, but i wanted to know if your instance is or will be blocking certain other instances to protect against potential harrassment and abuse. sorry if you’ve already addressed this and i overlooked it.

Yup, the fandom.ink server-level blocklist is based off the one published by dzuk.

So to any fandom people looking for a new home in the post-Tumblr world, I’ve set up fandom.ink as a fandom-friendly and fan-run Mastodon instance.

I’m still setting up some things like the terms of service (and the all-important custom emoji), but general policies will include:

For those unclear on Mastodon, it’s a Twitter-like social network, a primer on which may be found here. Any other questions, feel free to ping me. Otherwise, um… enjoy?

There is no social media saviour.

Mastodon in terms of features and affordances has for the most part copied those of services whose community management generally doesn’t work in the face of actual, planned, and sustained abuse.

Global social networks enable massive, coordinated, asymmetric, and sustained harassment and abuse campaigns. Being on an instance whose admin is willing to take aggressive measures helps but that’s still a game of whack-a-mole. There’s no reason to believe that federation as a network model (the main innovation Mastodon has over Twitter) is in any way a mitigation of coordinated harassment as a threat model.

Like Baldur I’m a fan of Mastodon—both as a technology in general and as a user, specifically—and I generally don’t have a lot of time for anti-Fediverse alarmism. But the Wheaton Incident (1, 2, 3, 4, 5, 6) did happen and is pretty much The Problem With Mastodon In a Nutshell.

Back in my first job, when I was a baby graduate in my first IT security team, a coworker had the following printed out and stuck above her desk: Non-technical problems require non-technical solutions. I’ve been thinking about that sign a lot recently, in the context of systemic abuse on online platforms. Because that’s a non-technical problem, and you can’t solve it with technical solutions; federation (or the lack thereof) won’t solve it, block buttons won’t solve it, machine learning won’t solve it, blue ticks won’t solve it. Some of it isn’t even about community management, in the sense of “an external force of Community Managers”; a bunch of the work is small-c community stuff, and I don’t even have a universal answer for what it should look like, other than a set of private rules I try and apply to my own behaviour.1

This isn’t even about Wil Wheaton; I have no particular feelings about the guy other than that he’s a dude who’s done some great things and done some shitty things, at a ratio that seems fairly normal for a human person. I am prepared to be wrong about this; I’ve heard the arguments against Wheaton, I get why people would personally not want to interact with him, and I’m not trying to defend his behaviour, some of which I think, yeah, is pretty shitty. I just… don’t think he’s exactly at “cancelled forever” status. Bu he is a public figure and, yeah, there’s pace for discussion on this topic. But the absolute vicious glee I’ve seen over the past two days around his harassment from Mastodon? Kinda… not here for it.

I get where it comes from, though. So much of (English-language) Mastodon is currently made of marginalised people who’ve been chased off other social media platforms by abuse. So I definitely think there’s an air of fear there; fear of “their” home being “invaded” by mainstream social media, as represented by a geek-culture-popular celebrity with a well-known online presence. People who are afraid lash out. I get that, I really do. But.

The main argument I’ve heard in favour of Wheaton’s harassment is that “allowing” him on Mastodon “sets a dangerous precedent”, because he’s got some friends that are… not great, and because of The Blocklist Incident. And, okay. Firstly, if you want to talk about “setting a dangerous precedent” I’m really… not sure you want to play around with “harass anyone deemed not 100% ideologically pure off the service” because, yikes.2

But, maybe more importantly, the whole point of federated services is that there is no single community to be “invaded”. Each server is its own community, with its own rules and norms and, yeah. If you don’t want Wil Wheaton, specifically, to be a part of your experience of that, you have tools to deal with it; like not displaying the Federated timeline, moving instances, or blocking/muting at the user/instance level, or whatever. At the moment, I think people are still very locked into the toxic mindset of big silo’d social media; there is only The One Thing and we must police The One Thing from a central point. Except something like the Fediverse is not like that by design. It’s a different paradigm to something like Twitter; not necessarily objectively better, but certainly requiring different mindsets and different policies and guidelines to approach. In other words, basically what I’m saying here is that, if you are trying to “police” the Fediverse? It’s very likely you’re being a dipshit at best and abusive at worst, regardless of how “righteous” you feel. I mean, do you police who can use email? Like, not any one specific email service but the entire concept/technological implementation of email in general. No? Yeah, funny that.

The upshot is I do think that, as the Fediverse matures and gains momentum and broader adoption—and I’m going to be positive and assume it does and will—people will eventually work themselves into more appropriate mindsets for how to navigate it. I’m Internet Old enough to remember when we went through this with blogging, for example, and Gen 1 social media. People even older than yours truly will probably have similar stories about Usenet and IRC and whatever, and not to mention IRL communities have been dealing with these sorts of issues for literally the entirely of human history. People do figure them out… sort of. At the very least, I’m excited to see what kinds of online community norms will emerge (or, rather, reemerge) outside of the distorting influence of centralised capital.

And in the meantime… Stay in your own damn timeline. Seriously.