This video made me want to go clean my own fishtanks…

So while we were away in Hong Kong, my betta may have gotten a bit too much love from the fish-sitter. By which I mean they gorged on fish food and got bloat and… well. Y’know.

I’ve been on the look out for a female/plakat for a while, for the Big Tank after the previous occupant finally passed away from old age. The fish shops here don’t stock them very often, so I was extremely excited to see not one but two (!) beautiful koi nemos when I went in on the weekend to buy Anubias. They were sold as a breeding pair, though I would put money on them being brother and sister1 and they went into different tanks; the boy into the Medium Tank, the girl into the Big Tank. That just leaves Small Tank unoccupied,2 which has the weakest filter of the three tanks, so I’ll probably keep an eye out for another delta or halfmoon.

On the other hand, I didn’t get any Anubias. I think this is like the first time I’ve ever seen the aquarium store without loose Anubias. But they’ve also apparently changed hands for, literally, the first time in my lifetime and the store is… very different. Mostly empty, but I hope that just means they’re in the process of re-stocking/renovating the layout rather than a sign of trouble…

Eep! I saw my pleco this morning for the first time in ages (usually he just hides in the log).

His chubby tum tum is making me think maybe I overfeed the tank a bit… either that, or “he’s” actually a girl and has eggs? Hm.

In other news, I got a new fishy boi. He was shy in the shop and had obviously been tail-biting, but he’s perked right up and his tail should grow back.

… Also apparently I really need to clean the outside of his tank glass.

Next I need to restock my fert supply. Oof. Right in the wallet…

Kids, never let anyone convince you fish are cheap/easy pets!

I swear finding this guy is like trying to take photos of bigfoot. Hopefully when he gets bigger (he should get to about 10cm) he’ll be easier to see.

In other news: Nails went into the tank today. He doesn’t seem to be having trouble swimming against the filter, which is great. His condition isn’t fantastic after being kept in QT for so long, but I’m hoping being in the bigger tank will get his colour and muscle definition up. He and the rasboras seem to completely ignore one another, which again is good.

Still way too much algae in the tank; I want to get some otos and maybe some shrimp (potentially dicey with the betta, but he’s pretty placid so we’ll see) but I might give it another month or so to settle in, since they tend to be more sensitive than the current stock. The snails are having fun in the interim, if nothing else.

60 gallon finally stabilised, so I went out and bought eight harlequin rasboras and a chocolate zebra pleco (L270), which should work for an initial stock.

Sadly Nails has come down with his gill pimple thing again, so he has to stay in the QT tank with some medicine until that clears up. Poor Nails; he’s been kept in the QT tank wa-aa-ay too long (the 60g took ages to cycle; much longer than I expected) and he’s been getting quite ill from it. Which I guess is what happens when you keep a betta in sub-optimal (<5g) conditions.

It’s definitely been interesting to watch Nails’ health in comparison to Hyleth’s (in the 7g) and Six’s (in the 20g). Hyleth got the gill pimple once which I think was from cross-contamination from Nails’ tank when I was using the same tweezers to feed them. Six has never had any problems ever.

I mean, it’s certainly wasn’t my intention to “test” the relative conditions in the tanks, but… yeah. Kinda ended up that way anyway.

Tl;dr, tiny tanks and betta do not mix. 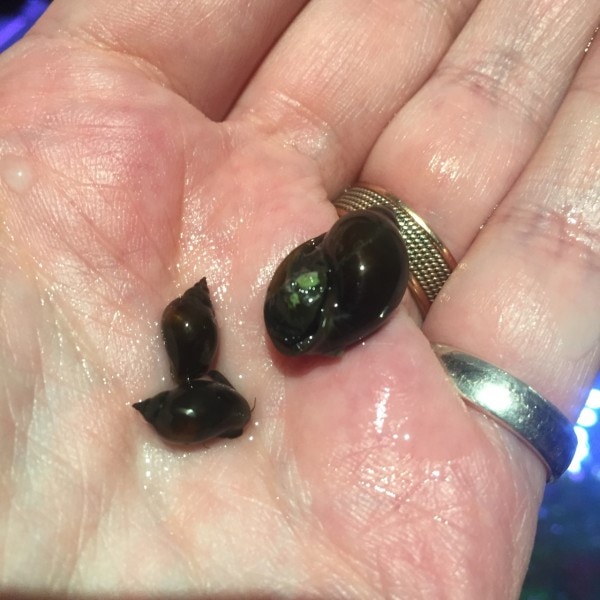 … they are not supposed to be that big.

Nano tank update. I need to do some pruning.

The photo really shows the pale patch on Hyleth’s back (you can barely see it normally), which is the scar from where he got stuck in the filter. The only further misadventure was this morning, when I came out to find one of the pond snails dried out dead in the middle of my desk. Oops.

So I moved Hyleth into the nano cube today. He was doing okay, until I came back from dinner and found he’d managed to get himself wedged into the outlet for the filter, which is about a centimeter round hole in the top left of the tank’s backing.