Him, wearing his wife’s pants: Where are the pockets?

Me and his wife, yelling: THERE ARE NO POCKETS!

The politics of women’s appearance is a painful tug of war between the meanings women intend to convey (which are as varied as the tiles of a mosaic) and those imposed on them by society, often by men who cannot countenance a symbolic universe in which women’s expression does not exist solely for male consumption.

The obvious example is the well-meaning man who, thinking he is being affirming, tells us that we need not wear makeup on his account because we’re beautiful just the way we are. It sounds lovely until you realize that this presumes we wear any amount of makeup for his benefit, or to persuade men in general that we are beautiful.

To see a woman with a lot of tattoos, a lot of non-ear piercings, a non-traditional hairstyle and/or hair dye is to see a woman who is making her ownership of her body plain as day to anyone who looks at her. Note, this is very often not the intentional “political statement” most wish to make. Most simply like dressing this way, after all. They do it for themselves. But some men insist on reading it as a political middle finger flipped in their direction.

–Katherine Cross dresses for herself.

At first I thought:

“The Apple Watch is kind of cool… but who’s going to need one? I always have my phone in my pocket anyway.”

Then I bought some skinny jeans. And now I’m like:

Well, this isn’t entirely accurate, but I’m discounting my teenage goth misadventures with black lipstick and I’m hoping you will too because… yeah. No one needs to remember that.

This is probably because my mum doesn’t wear it, and never has. I remember when I was about ten or so, she went through a phase of trying to “do make-up.” I went with her to the Big W and watched as she filled up her basket with lipsticks and eyeshadows and mascaras and all kinds of things. We went home, and she tried it out, and… I think maybe she wore it, like, a dozen times after that? I dunno. I definitely remember what she looks like “made-up,” but don’t recall actually seeing her with make-up on for a good few decades. I do remember all the CoverGirl going into the bin, however, and that being the end of that.

Prior to today, there’ve been exactly two times in my life when I’ve worn “full” make-up. Like, not just a half-assed smear of black on my lips or eyes, but actually proper primer-foundation-concealer-powder style stuff. The first time was when I was matron-of-honour at my friend’s wedding, and was applied by her mother. The second was when I got my author bio photos taken, with make-up applied by the photographer’s wife. Other than that… nothing. And I’d never done it myself; I just didn’t know how. I knew it was complicated, and there were all these… things and they all had to go on particular parts in particular orders and whatever, but all that meant was I knew make-up was difficult and had no clue where to even start.

Well. One of the things I decided to do in 2015? Was even start. END_OF_DOCUMENT_TOKEN_TO_BE_REPLACED

Excuses as flimsy as three triangles of spandex.

I’m not stupid; I know why people didn’t want to see me in a bikini. But apparently, I seem stupid to the people who tried to discourage me. I wasn’t supposed to see through their excuses, or realize that the connections they were making were flawed. Our cultural discussion of fat bodies and how we clothe them has nothing to do with health concerns, the obesity epidemic or the comfort of fat people. It has everything to do with what we expect from women, what we’ve been told by the fashion industry and the value we place on “perfect” bodies.

The reason these people do not want to see a fat body in a bikini is because traditionally, that garment is something a woman earns by proving herself attractive enough to exist. If fat women begin wearing them without shame or fear, what’s next? Will they have self-esteem? Will they demand respect? Then what will keep them in their proper place? How would conventionally attractive people judge them?

–Jenny Trout wore a bikini and… a fair bit happened, by the sound of it.

(via the first, last, and only fashion blog you will ever need.)

"When Suits Become a Stumbling Block: A Plea to My Brothers in Christ*" by Laura Polk - The Salt Collective

There has been a lot of talk among Christian bloggers lately about modesty and ways to combat everyone's favorite evil: lust.

Oh won’t someone think of the children!

Marilyn Monroe was not a size 16. 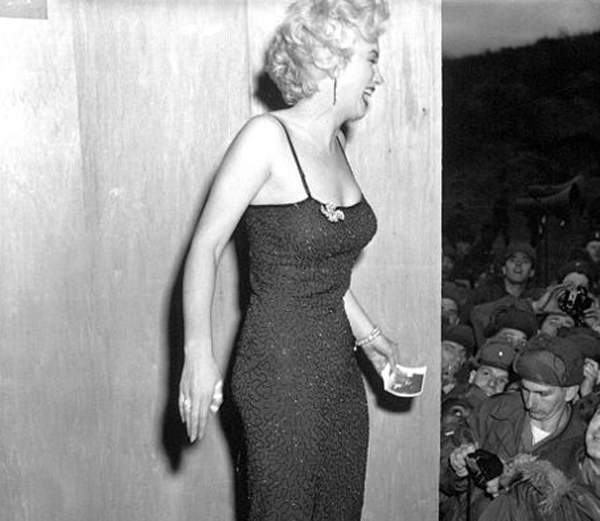 Marilyn Monroe was Not Even Close to a Size 12-16

So let’s quit it with this one–and its implicit undercurrent of fat-shaming-disguised-as-body-positivity–hey?

1. Tiny pockets that can’t fit anything and mean we have to carry purses or bring nothing with us anywhere. Also see fake pockets. 2. Teeny tiny sleeves that show off your armpits so that you have to decide whether to shave or get weird looks about your body, and also won’t fit over anything …

Seriously, it does. A lot. Like, to the point where my mother made me some new slacks for work recently and I nearly cried. They fit! And had pockets! And I could sit down and walk and, oh! Happy day!

The ironic part? She made them based off an old pair of off-the-rack pants I really like, but that have gone out of style. I bought them back when loose, wide-legged slacks were The In Thing; a comfortable and practical design for big-thighed ladies always always alert for zombie apocalypses like yours truly. Sadly nowadays skin-hugging legging-esque things are all the rage–yes, even in work pants–and these are both brutally uncomfortable and horrifically lacking in pockets.

Nothing makes me angrier at work than having to sit down for eight hours a day in uncomfortable pants with no pockets. Nothing. So fuck that.

Tl;dr: I have new pants and women’s clothing sucks.

So you know those ridiculous cone-shaped princess hats? Apparently they were inspired by Mongol warrior queens.

Not so ridiculous now, are they?