The formula can only be failed.

“Write X many books and you’ll make five digits!” When? In a year? That’s not that impressive. In a month? In a lifetime? What’s the time frame here? It’s never explained and yet the formulaic approach, the idea that it’s just a matter of numbers and not talent or connections or luck, is a very attractive one to some people. It was to me.

This is about oversupply and burn-out in the indie publishing scene, specifically in the romance genre. And also, semi-tangentially, about Cockygate which if you missed it, is mildly amusing in a WTF sort of way (although, it should be noted, was devastating people hit by it).

Incidentally, this whole flooding-the-market-with-dreck is known as forming a market for lemons, and there is an excellent discussion on how it applies to ebooks (of all types) here…

For all you authors and editors who have wrassled a long novel to its editing conclusion, there is one constant truth: you will always have regrets when looking back at some annoying error(s) that slipped through much to your bewilderment.

I think it’s an immutable rule of publishing that, no matter how many rounds of copyediting a work goes through, it’ll still always, always, have some errors. One of the nice things about publishing on the web is the ability to dart in and click Edit Post if you happen to notice an after-the-fact typo. With traditional print publishing? Maybe not so much.

Except… what about ebooks?

This is kind of like the crowdsourced software patching version of book publishing.

E-books for sale, but not selling, at independent booksellers

E-books for sale, but not selling, at independent booksellers

So most small and independent booksellers sell ebooks. Not that anyone buys them.

This has got to do, as usual, with ecosystem lock-in, where the platform is the distributor is the vendor. Convenient for customers, maybe not so great for the industry. We’ll see.

From a while back, The Authors Guild [sic] on what’s “fair” in ebook royalties. What’s interesting here is the history of how and why ebook royalties are what they are, as well as the breakdown of exactly how much authors receive when their titles sell as physical books versus ebooks. Basically, the argument is that ebooks are proportionally (and absolutely) more profitable for publishers than for authors.

That being said, the Guild is comparing ebooks to hardcovers which… isn’t necessarily the fairest comparison. But, yanno. The Guild are authors, not mathemeticians. They tell stories, which is what they’re doing here. So take the numbers with a grain of salt.

What price an e-book?

I was asked today to 'have a word' with my publishers as The Liar's Key ebook is £9.97 on Amazon. I don't have any say in setting the p...

Mark Lawrence looks at where the money goes in ebook pricing. Hint: it’s mostly not to the original author. Actually, by these figures, most of it’s going neck-and-neck to Amazon and the publisher. Whichever one of those two entities “deserves” their cut probably depends on which side of the selfpub/tradpub debates you come down on…

Firebrand's Joshua Tallent explains why proprietary ebook formats persist and what readers and publishers gain as a result.

This is an article arguing for the benefits of proprietary ebook formats, to which I have just one single answer: HTML.

I’ve talked about this before, but the tl;dr is that HTML–the stuff webpages are built with–was almost entirely stagnant for about a decade when Internet Explorer had an effective monopoly over the browser market. There was no point developing innovative new features in HTML because Microsoft wouldn’t implement them, and if Microsoft wouldn’t implement them, no one would use them, and if no one would use them, why even fucking bother? And Microsoft itself had no incentive to progress HTML as a standard because it already had the market so locked down it didn’t matter that the tech behind it was crap, given there was nowhere else for people to go.

It wasn’t until Firefox and Chrome became major players  that everyone had to start competing on feature-sets again, and the HTML standard rocketed forth; it’s had more updates in the last few years that in the whole decade prior. This is the reason why shit on the web looks a millionty times prettier and more dynamic than it did in the early 2000s.

Ebook formats are now where HTML was in those Dark Days of Internet Explorer. EPUB is trying hard but Amazon’s proprietary mobi format fucking isn’t, but because it’s so dominant. And this holds back innovation in the entire market. As I said in my previous post:

Unlike HTML and EPUB, however, mobi is controlled by one single company (Mobipocket, owned by Amazon since ’05). The reality is that, the IDPF can add all the awesome features it wants to EPUB, and vendors can even implement them in their readers, but because Amazon owns so much of the ebook market, publishers will drift towards formatting ebooks in the most “cross-platform” compatible way, which means the features included in mobi becomes the de facto baseline standard. Why bother, after all, spending the extra time adding extra, EPUB-only features versions of your books that will only be read by a tiny fraction of the market?

In other words, Amazon has effectively engineered a market where competition can’t occur based on format innovations. Being the ereader with the “best” implementation of EPUB means fuck all when no-one is leveraging that, either on the publishing or the consuming side.

Basically, not only do format monopolies suck, but we’ve been down the sucking road before. We forget that history at our peril.

The Many Sides of Bundling

Earlier this week, Tor announced that it had partnered with BitLit to offer discounted ebook editions to readers who already own print editions ($2.99 per book). Angry Robot has had a bundling prom…

Buy the print book, get the ebook for free. Sounds like a dream, right? So why don’t more publishers do it? Well, Michael R. Underwood looks at some of the mechanics behind how bundling works and how it impacts authors.

It’s also an interesting post if you’ve ever wondered about why ebook prices for commercially published p&e titles are so high.

It’s worth noting that, in addition to being an author himself, Michael works for Angry Robot1 on the publisher side of things. I also assume he, yanno. Reads books, too. So he absolutely is the sort of person to listen to in these discussions, given that he has a stake on all sides of the argument.

Interesting look at publishers who are moving back to serialised formats for digital releases. Fandom authors may recognise the strategy…

Self-published success: not so much the gateway to New York bigbucks.

For a while there, doing well with self-published ebooks was seen as sort of a “way in” to a traditional Big 5 print deals. In 2015, it seems agents and editors alike are cooling off on the idea. The perception that a hot selling selfpubbed title would do even better with the weight of a major publisher behind it seems to’ve lead to more disappointments than successes.

There’s also the fact that the ebook market is super, super saturated. Leik woah. And there seem to be some signs consumers are starting to get a bit sick of it; where once the ocean of choice was New and Exciting, now it might be pushing into paralysis territory.

If I was going to be making outlandish predictions for publishing in 2015, I would suggest that one of them might be a cooling off of publisher desire to pursue “pure” ebook markets, or to be running ebook-only imprints. This is… obviously not a super comfortable thought for me,1 but such is life, I guess. 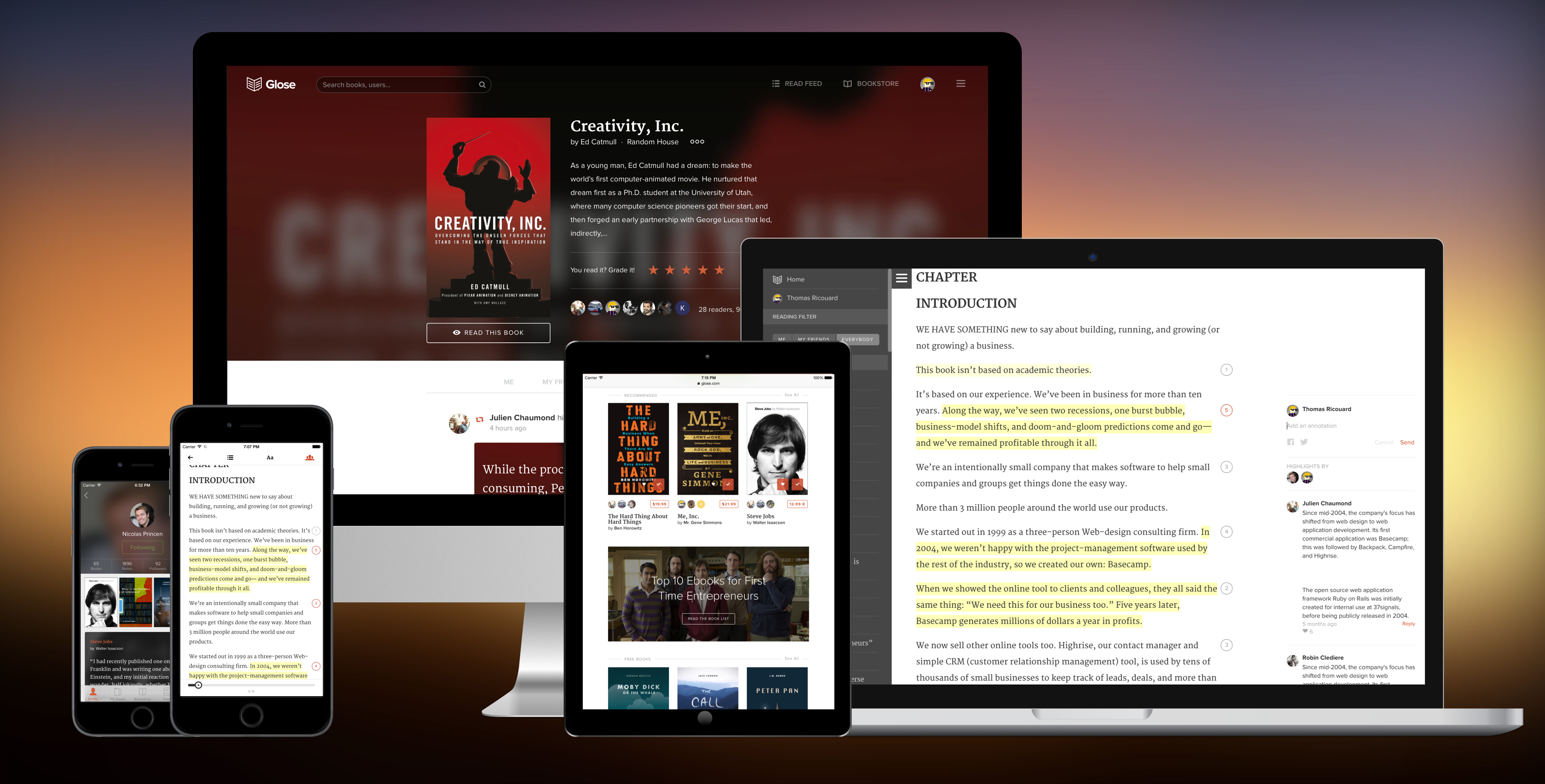 Meet Glose, a brand new ebook reader for your phone, tablet and laptop. Glose is like the Kindle apps, but on steroids. Reading a book in Glose becomes a collective experience as you can discuss qu…

Apparently there’s a new ereader on the market, Glose, which adds a bunch of social/sharing/discussion features to ebooks.

I haven’t actually used the app, though I did download it. The selection of books is pretty strong but, of course, none of the books you’ve bought from other sources will work within Glose, and you can’t (that I can see) import books from a non-Glose platform into the app.

I also think the discussion/annotation stuff is all public. Which… is just such major facepalm.

One day, tech bros will learn.

One day, not today.