… also looking at all these covers lined up together I definitely have A Type, and that Type is “pastel blues and pinks with black-and-white contrasts.”

So yeah. 2020 was A Year but, somehow, we actually managed to get out an anthology? Admittedly on, like, the literal last day of the year—and with print versions still pending—but, like… we did it! Unnatural Order is out and is an Actual Thing you can buy and read?

(Jax‘s cover art is still amazing, also. Sorry I had to ruin it by putting dumb words all over it…)

So because I apparently forgot to unenroll Liesmith from KDP Select (guuh), it is currently FREE on Amazon for the lead-in to the spoopy season.

While not, strictly speaking, horror, the book’s main influences are, a) Silent Hill, and b) Audition, so… yeah. Seasonal!

Because I finally got around to it, print versions of Liesmith and Stormbringer are now available for direct-from-me ordering, for those of who who don’t want to/can’t/whatever buy the Amazon versions.

As per usual, I will, indeed, be there. I’m currently scheduled on between zero and two panels:

I say “between zero and two” because there’s currently contentious around both of them for various reasons, but failing massive… failing, that’s where I’ll be, if anyone feels like listening to me blather in public.

Update: Okay, not so much with the superheroes. The tl;dr is the panel was split between people who agreed with the premise (i.e. yours truly) and those that didn’t. I was interested in the panel in the context of it being a place to gripe about the genre in general, and the hyper-commodification of it in e.g. the MCU in particular, but in the end that wasn’t where things were going, and it felt like keeping things as they were was just going to get… emotionally fraught for all involved. So that’s a peace out from me on that one.

Confessions of a failed author.

So… I got some shitty news yesterday; the final reader for my YA dragon shapeshifter novel passed. Which, for those of you not in “the industry”, means that the book has now been formally rejected by every major Big 5 publisher.1

This is the third completed novel in a row for me that’s bounced off commercial sale, and 2019 makes four years2 since I actually had a publishing contract.

The consistent feedback from editors on Dragon, incidentally, was that they loved the writing/”voice”, but couldn’t identify with the characters. This is the feedback I get on pretty much everything (“We love the way you write, we just hate what you’re writing about.”) which is either like the generic industry “thanks but no thanks”, or something I’m personally especially cursed with. Either way… frustrating. And depressing.

Point being, Dragon is basically DoA as a commercial book. I have some other options for it but, honestly, the though of pursuing them just makes me tired. So fucking tired. So… whatever. In the spirit of the season, i.e. Marie Kondo Discourse Month, I’ve decided trying to sell Dragon no longer, as they say, “sparks joy”. And in the spirit of “what the hell, at least someone else may get something out of this”,3 I’ve decided that, over the next few weeks, I’ll be throwing the novel up online.4 On Wattpad because… it seemed easiest? So sure, let’s go with that.

Anyway, the first chapter is up, so… go check that out? Sweet.

And, uh. In the meantime… here’s a pic of the main character, Elias, I did like three years ago5 and will totally one day finish I swear. 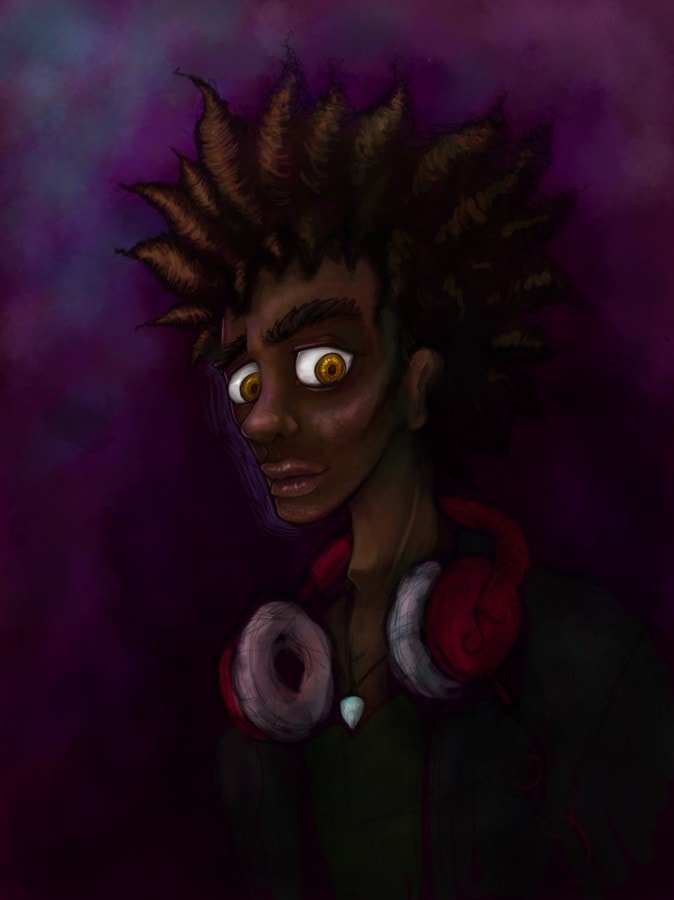 Wyrdverse, Conflux, and Kickstarters (oh my)!

Oh no. It’s That Time of the Year again, the time when… (looks around nervously) … things happen.

I formatted a book! Wyrdverse: Tales of the Wyrd is an anthology of short stories from the, well. Wyrdverse. These aren’t new—you may have previously read them on my website—they’re just now… collated better.

Wyrdverse is currently available super-cheap from Amazon, although if you’d like to snag yourself a free copy you can do so from the princely sum of your email address, by signing up to my book news mailing list.

Oh, and because the whole purpose of this exercise was to practice using Indesign, a print version of the book (in all its extensive, 80-page glory) should be available sometime in the next few weeks. So… keep an eye out for that.

Speaking of awesome books you should buy (or, rather, back) right now, Crossed Genres’ Resist Fascism speculative fiction anthology is in the final days of its Kickstarter. From the official description:

RESIST. ANY WAY YOU CAN.

The world is in turmoil. The world is always in turmoil, but in recent years, people have seen violence and hatred become proud instead of ashamed. What meager rights we’ve fought for are being deliberately eroded. And the vulnerable have any help stripped away. All of this is happening openly and without fear of reprisal. And the worst perpetrators are some of the largest governments of the world.

Resisting the spread of fascism is as important now as it was 75 years ago. And there are many effective ways to resist.

For full disclosure, friend-and-all-round-awesome-person Rivqa has a story in this anthology, and I have read it and it is boss. So if you, too, would like to read a boss story about found family and Jewish jujitsu IN SPACE, then you should go smash that pledge button, as the kids on teh YouTubes say.

Oh, and while you’re in the spending money mood,1 Mother of Invention is on sale! From the blurb:

Awesome? Yes. So what are you waiting for? Buy like a hundred copies and you’re set for presents to give out to all your friends, enemies, and loved ones at every birthday, anniversary, and culturally appropriate religious celebration for the indefinite future. Let’s all knit a softer, warmer robotic future together.

Conflux! It’s coming, and I will be there. You can even come hear me blather on about narrative in the panel Play to write: what tabletop and video games can teach writers of fiction. And by “me” I mean “Rivqa and Elizabeth“, and by “blather” I mean “make interesting and intelligent points while trying to ignore their drooling co-panellist (i.e. me).”

Sound great? Of course it does! See you there.

So I might not have a blurb, a cover, but what I do have a pre-order links for my first novel, LIESMITH1 (this one, remember).

So… yeah. I don’t have official cover copy to dazzle you with marketing brilliance, but what I can say is LIESMITH is a queer urban fantasy blending Norse mythology with modern tech culture.

Yes, it has zombies. Seriously. Every single person has asked me this. There are zombies. They’re Viking zombies, but they’re still zombies.

During the course of the book Lain and Sigmund will also have to deal with:

Plus romance, violence, family angst physically manifested into horrific monsters, a lot of things catching fire and/or blowing up, and one really cool car.

What more could you want? Kissing? We got that. Zombies? Still got that. Drop bears, rangas, and other weird Australiana? Yup. Norse mythology puns? Boy howdy! A flipped-over reenactment of Gandalf fighting the Balrog at the roots of a giant tree hung full of corpses? Yup, got that too. Seriously. It’s awesome.

So fly, you fools, and go pre-order right now, from Amazon, Barnes & Noble, iBooks, and/or these other fine retailers. The whole thing will be out for realsies later this year, circa October, but this way you can totally say you were all over the book before it was cool! The God of the Hipsters will bless you with perfectly frothed lattes for at least twelve months because of it, I swear.

Also keep an eye out for more details in the coming months.

You gais, Imma gonna be an author!

So hey who remembers at the end of last year when I rambled about signing with my literary agent?

Well, you gais, you gais… Guess what just went live on Publishers Marketplace?

Alis Franklin’s WYRDTOUCHED, [note: since renamed LIESMITH] in which an exiled Loki, hiding out in Australia disguised as the CEO of a tech company, unleashes the wrath of Asgard by falling in love with a man in his IT department, to Sarah Peed at Random House, in a three-book deal, by Sara Megibow of Nelson Literary Agency (World).

That’s right! It’s me! Or, rather, my book. Books. Hopefully three of the suckers, because… eee!

/degenerates into a puddle of squee

And, look. I’m not super-articulate right now (my first sale as a Really Real Author! holy shit!), so in lieu of more words, here’s some Bad Character Sketches of LIESMITH’s soon-to-be-published protagonists:

It’s been kind of an intense couple of months, as you can probably imagine, and by all indications it’s just going to get more intense from here on out. (Did I mention the part where I have to write two more books now? Holy shit!)

But before I go quietly hyperventilate in a corner, I’d just like to say one thing.

I’ve had LIESMITH kicking around in various incarnations and various states for the better part of my life, so finally getting it to this point–where it’s actually sold, to a publisher, as part of a multi-book deal–is both terrifying and exhilarating.

It’s those things for a whole bunch of reasons, but one of them is this:

LIESMITH is an urban fantasy and it is, unabashedly, an urban fantasy with a queer protagonist.1 The romance plotline–which, while it isn’t the story, is a freakin’ big chunk of it–is between two guys. Without giving away too many spoilers (hah!): it’s there, it’s on page. There’s kissing. No hints or subtext or innuendo allowed.

Did I mention the part where Random House–that’s Penguin Random House, literally the biggest publisher in the world right now–bought not just one but three of these books?

Do I think I would’ve been able to sell LIESMITH–as a debut author no less–five or ten or fifteen years ago? Maybe, probably not, and almost certainly not, in that order. (And not just because of my own relative level of writing ability.)

There’s something in that. And a lot of people who came before me, who I owe for beating down that door. Not to mention the support I’ve received from both my agent, Sara Megibow, as well as shiny new editor, Sarah Peed. Seriously. Those ladies rock, and the support and encouragement I’ve received has been amazing. (Go Team Sara[h]!)

The representation of GSRM characters in fiction in general, and genre fiction in particular, has been… somewhat patchy, shall we say? But things are changing. Slowly, but they are. Because representation is important, and the more voices there are in the chorus the better.

Mine’s only one. But, well.